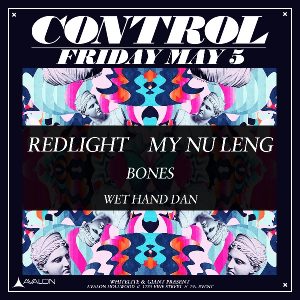 Redlight – Redlight is a British DJ and Dance Music Producer brought up around 90’s warehouse rave culture in Bristol. His music and career has spanned over a decade, having spent 12 years grafting on the underground, popping up for air in 2012 with a couple of Top 10 UK hits in the national charts. He has since then released his debut solo album entitled X Colour. He has collaborated with artists such as Mobb Deep, Raekwon (Wu-Tang Clan). Remixed acts including Mary J Blige and Tink, defining genres, remaining one of the UK’s most consistent and exciting producers of recent years with many more to come.

My Nu Leng – With three releases already under their belts for Black Butter and MTA Records, Tommy and Jammo have built on their tastemaker status to produce remixes for the likes of UK No.1 “La La La” by Naughty Boy, “Right Here” by Rudimental, and “Mozart’s House” by Clean Bandit. With Jammo originally hailing from High Wycombe and Tommy from Kent, the duo combined to form My Nu Leng when they moved to Bristol, taking influences from the spectrum of underground UK sounds with them – Drum and bass, Dubstep, UK garage and Grime all find outlets in their music. My Nu Leng are similarly known for their blistering sets and dark, smouldering vibe, heavy on the mood but always compulsively danceable. From their adopted home of Bristol – where early Reggae, Drum and Bass and Dubstep pioneers all the way to Massive Attack and Portishead informed their cultural history, both understood the heritage and importance of bass music in the city. Since then My Nu Leng have toured pretty much all over the world: the United States, Australia, New Zealand and Asia, all showing love and emphasising the realisation of how far they’ve come from their first singles to their most recent EP ‘Horizons’ getting heavy radio support on BBC 1Xtra and BBC Radio 1. With new music on the way and a packed diary of live tour dates, these are exciting times for My Nu Leng, proving they’re equally at home on underground tracks and Official Number One records. A tricky ask, Tommy and Jammo – just like their meteoric career so far – have made it look easy.