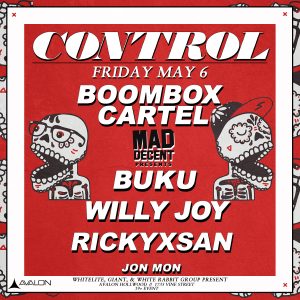 Boombox Cartel – Residing in Los Angeles, Mexico-born artists Americo Garcia and Jorge Medina have built a name for themselves as a “must watch”, highly talented, up-and-coming duo. Having an incredibly diverse musical background, Boombox Cartel combines their love and knowledge of music with an innovative and unique sound.

Buku – From the first glimpses of Robert Balotsky’s work as Buku, it was clear that the Pittsburgh native and graduate of Music Technology was onto something. With an effortless grasp on sound design and music theory, the young producer combines deceptively simple and emotive melodies, laden with resounding bass drops and intricate drum patterns. With a love of drums rooting from childhood, his work reflects the obsession – emitting percussive elements only a trained ear could produce. Behind a kit since age 8, he followed the progression of handling percussion duties for multiple bands throughout his adolescence. Once introduced to digital production, Buku took his techniques to stranger dimensions – and he’s been pushing the boundaries ever since.

Willy Joy – Don’t try to classify partymaster Willy Joy as anything but that – a party. He and his productions have been packing sweaty dancefloors across the country from major festivals to sweaty underground raves. His songs have been remixed by some of today’s top producers such as Dillon Francis & Flosstradamus while tearing up clubs across the country. Willy’s tunes get played by the likes of Diplo, Adventure Club, Brillz & BBC Radio 1. Willy represents the eclectic new breed of bass music, rapidly changing styles and tempos with ease while always maintaining a frenzied, hands-in-the-air dancefloor. While creating official remixes for Major Lazer, Flosstradamus, A-Trak and original releases on Fools Gold and Firepower Records, Willy also co-produced “Mash Up The Dance” with Major Lazer for their album “Free The Universe”. He collaborated with Brillz for the standout track “WTF” on the TWONK EP, and many more collaborations are in the works. He is currently prepping a slew of new music for release later this year.