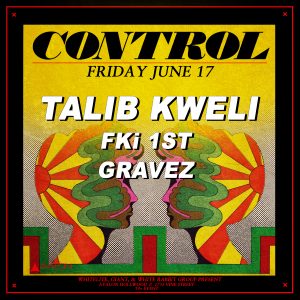 Talib Kweli – The Brooklyn-based rapper earned his stripes as one of the most lyrically-gifted, socially aware and politically insightful rappers to emerge in the last 20 years. His travels around the globe as one of rap’s most in-demand performers combined with his conversations with political activists and his genre-straddling work with Idle Warship and others caused Kweli to realize that he was limited in a sense, a prisoner of sorts of his own success as one of the world’s best rappers with something significant to say. “My music has been associated with those types of causes, with positivity, spirituality, intelligence and being thought-provoking and such,” he says. “I think sometimes people get caught up in that part of me as an artist and don’t necessarily understand the musicality or fully appreciate the music and the entertainment value behind what I do. I tried to stretch my wings a little bit and bring something that was less beholden to the world of hip-hop and more existing in the world in general.” The result of this artistic growth and exploration arrives with Kweli’s dynamic Prisoner Of Conscious AKA P.O.C., an artistic tour de force that signals the start of the next chapter of Kweli’s remarkable career. The BK MC spent more time working on Prisoner Of Conscious than any of his other albums, a three-year journey that found him exploring new vibes, joining in some unlikely collaborations and taking him to foreign lands.

FKi 1st – Atlanta based production team/hip hop artists, FKi is known for creating heavy bass, trapstep and edm inspired hits for industry heavyweights like Tyga, Iggy Azalea, T.I., Juicy J, YG and Jeremih. The two led a 12 city tour early 2013, The Certified Trap Tour, powered by Livemixtapes and Mad Decent to promote the trapstep genre as well as the artists and DJs that pioneer the trend. FKi, comprised of SauceLord Rich and 1st Down, got their start in the music industry engineering after receiving degrees from Full Sail University in 2009. After engineering for several artists and perfecting their craft, FKi had the opportunity to work at Collipark Music; Atlanta based production studio and record label responsible for artists like Soulja Boy. It was there where the two met producer Mr. Hanky who then introduced them to Travis Porter. One thing lead to another and FKi found themselves producing hits “Make It Rain” and “Bring it Back” for Travis Porter. FKi’s sound is a heterogeneous blend of glitch hop, hip hop, drum and bass – trap music making it difficult to limit their fan base or genre of artist you may hear over an FKi production. This sound was first heard heavily on FKi’s premier mixtape Transformers in the Hood. TNTH, presented by international DJ and Mad Decent curator, Diplo, garnered much deserved attention from electronic, hip hop, and trap music forums throughout the US and abroad.
From engineering to executive producing, FKi went on to produce Iggy Azalea’s entire Trap Gold EP in 2012 and DJed her European tour. FKi also collaborated with producers like Israeli dubstep producer Borgore, Flosstradamus, The Jackie Boyz, The Invisible Men and Diplo to name a few. FKi continues to make music by drawing inspiration from the world around them. What’s next for FKi? More MUSIC! executive producing and artist development, new production and collaborations with today’s top producers.

Gravez – After accumulating over 4,000,000 plays within a time span of four months, 22-year old Atlanta-based rising producer Gravez has made a name for himself with reinterpreting music from the likes of Drake, Jaden Smith, Travis Scott, Rae Sremmurd, The Weeknd, Justin Bieber, Goldlink and much more. With his futuristic and artful style, you can expect the young and rising Atlanta native to expand his repertoire to much bigger things in 2015. Gravez has continuously provided stellar back to back releases whose sounds have accumulated the attention of collectives such as Soulection and HW&W Recordings as well as being featured on Hypetrak, Diplo & Friends, BBC Radio, Okayfuture, Hillydilly, DoAndroidsDance, Earmilk, Pigeons & Planes, Indieshuffle, Complex, DJ Booth, AshleyOutrageous and more. With artists like OG Maco, Rome Fortune, Young Thug and iLoveMakonnen pushing the envelope as emcees in Atlanta, Gravez his beginning to carve his own lane among the wave of producers creating unconventional backdrops helping Atlanta natives to stay ahead of the curve sonically. Gravez is now working on finishing up his debut ep, New Blood, which is set to release later this year as well as having much more in store for us this year between his original works, remixes and collaborations.