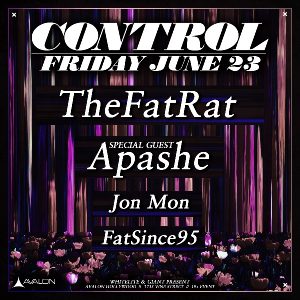 The Fat Rat – TheFatRat is the EDM moniker of Göttingen, Germany’s Christian Büttner, who has been active as a producer, songwriter, and engineer since the early 2000s. His music ranges from euphoric progressive house to trap and glitch-hop, with a heavy influence of video game music. He is enormously popular on YouTube, particularly with the gaming community, and has over a million followers. Büttner started using the name TheFatRat in 2011, and his initial tracks were giddy, bass-heavy electro-house. His most popular originals include “Unity,” “Time Lapse,” and “Monody” (featuring vocalist Laura Brehm). His first major-label EP, Jackpot, was released by Casablanca in late 2016.

Apashe – The Legend…Witnessing the destruction his family had caused as the first to be infected, Apashe confronted them. There was no escaping their wrath, and so, amidst the madness in the household, Apashe reached for his grandfather’s tomahawk. As he ferociously swung the ancient weapon at the savages, Apashe knew the flesh he cut into repeatedly was that of his own blood; his own family. Fighting for his life, Apashe’s mind spun and anger rushed through his shaking body. In a final spit of rage and lunacy Apashe managed to behead the last attacker; his father. Horrified and drenched in sinew he stood among the mangled remains, blood flooding at his feet. He had managed to escape their blood-thirsty urges. As he reached for the front door, he glanced back one last time at his dismembered family. His father lay closest, and reaching down and taking a two-feather necklace from his father’s headless body, he made a promise to avenge whoever was responsible…