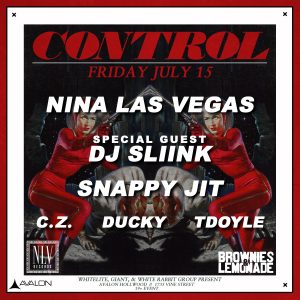 Nina Las Vegas – Nina Agzarian has been working in Australian radio for over a decade. After being forced into music tuition by her parents, at age 18, Nina relocated from country town Wagga to Sydney, where she entered the world of radio production. After producing mixtapes, podcasts and radio specials, she was eventually coerced into becoming a DJ. For the last seven years Nina has emerged as one of Australia’s premiere DJs, touring relentlessly around Australia’s best clubs and festivals including Splendour in the Grass, Groovin’ the Moo, Big Day Out, Stereosonic and Parklife (where she also hosted the main stage). It was also through DJing that Nina connected with fellow DJs Diplo and Levins, founding Heaps Decent: an ongoing initiative, committed to nurturing creativity in underprivileged and Indigenous young Australians. Now in its seventh year, Heaps Decent works with young people and emerging artists from marginalised and disadvantaged communities, providing a means by which they can tell their story in their own way.

DJ Sliink – Born Stacey White on November 8th 1990 & as part of the brick Bandits Crew later down the line in life, DJ Sliink’s records have been obliterating festival and club sound systems through the hands of some of the most influential dance music producers in the world such as Diplo, A-Trak, Skrillex, Flosstradamus, Baauer, and Jackmaster. His signature Blend Of Jersey/Philly/Baltimore Club, incorporating aggressive uptempo rhythms with soothing pop and R&B samples give him extensive appeal across the mainstream and underground spectrum. His sets run the gamut of Jersey/Philly/Baltimore Club, House, Electro, Trap, Hip Hop and Dance-hall – the standard load out for a world wide club DJ. With releases on Fools Gold, Mad Decent, Ultra, OWSLA, Hype Headz, Pelican Fly, Fade To Mind, Mean Bucket, Freshmore, T&A, Moveltraxx, Trouble & Bass, Car Crash Set, Mixpack, Paradisica Recordings & an upcoming debut EP, this naturally gifted talent out of Newark, NJ is an artist to watch in this emerging wave of hybrid dance music.