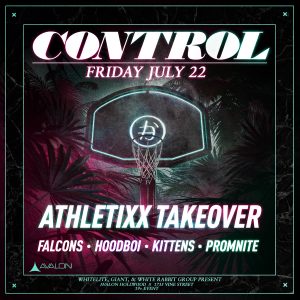 Hoodboi – Hoodboi is the persona of LA-based DJ/producer Roger Schami. Beginning in early 2014, He gained widespread media attention with his club edits of 90’s throwback anthems. Since then, Hoodboi’s toured across the globe with world-renowned DJs such as A-Trak, Dillon Francis, and Flosstradamus, premiered his official Chromeo remix on BBC Radio 1, released his debut EP “Palm Reader” on Fool’s Gold Records, and collaborated with artists like Lido, Djemba Djemba, Sweater Beats, Alison Wonderland, DJ Sliink and many others. In 2015, he co-founded Athletixx, a DJ crew made up of himself, Falcons, Promnite and Kittens. They quickly picked up massive support with the release of their first mixtape and clothing line. With many more surprises along the way, Hoodboi’s future looks bright and filled with emojis.

Kittens – It takes an equal part talent, finesse, sass, and balls for a woman to get the right kind of attention in the ever competitive industry of young DJs and producers…Kittens has just that. With her vast knowledge of music and past as a dancer, Kittens (born Lauren Abedini) has been able to find a balance between low grinding electronic beats, heavy rap, and future beat music which has earned the support of some of the most influential artists of our time; including longtime mentor, Usher, Kid Cudi, whom she supported on his 2013 tour, Skrillex, Gaslampkiller, Salva, and A-trak who has her signed to his record label Fool’s Gold as well as championed her in every facet of her career. Mixmag and The Hundreds have named her as a “Rising Producer/DJ Shaping the LA Club Scene”. She has made countless “Top Female DJ” lists and Source Magazines ’25 Women To Watch’ as well as being mentioned as one of Los Angeles’ major players by Thump. Her aggressive style of DJing, made through quick cuts inspired by her foundation as a hip hop DJ and harder track selections often leave people pleasantly shocked to find she is not as soft and fluffy as her name might suggest.