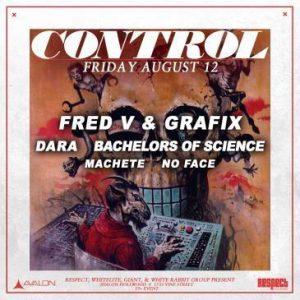 Fred V & Grafix – Fledgling stars Fred Vahrman and Josh Jackson a.k.a Fred V & Grafix signed to Hospital at the end of 2011 and have been making waves ever since with regular appearances on BBC Radio 1Xtra and mini mixes on Annie Mac’s show. A pair of producers who have been working together for the past five years now and showing huge promise, the boys brought us an abundance of musical gems before they delivered their debut EP on Hospital in March 2013. Recent recruits to the scene, Fred V & Grafix were initially into live music, with Fred’s guitar talents still coming into good use in the duo’s tracks. The pair converted to D+B when they heard Pendulum’s controversial and genre-changing album “Hold Your Colour” and High Contrast’s sophomore “High Society”. Influenced by an eclectic range of sounds outside of D+B, from electro/French house, ambient and hip hop, Fred V & Grafix cite artists such as Flying Lotus, Bonobo, Dilla and Jimi Hendrix as key inspirations, alongside fellow Hospital artists High Contrast and Logistics.Having already released music on Allsorts and Talkin Beatz, and received Radio One support from Zane Lowe and Annie Mac, Fred V & Grafix made their first appearance on Hospital as part of the “Fifteen Years Of Hospital Records” album with “Find My Way” and have continued to take the label by storm. As well as producers within their own right, Fred V & Grafix have also stunned us with their remixes of Emeli Sande – “Daddy”, Skepta – “Hold On”, Camo & Krooked – “All Fall Down” and not forgetting their amazing remix of Rudimental’s chart-topping No. 1 hit “Feel The Love”.

Dara – A member of the infamous Planet of the Drums crew alongside fellow drum ‘n bass pioneers AK1200, Dieselboy, & J Messinian, this Irish transplant has been a dominant figure in the U.S. drum ‘n bass scene since his arrival here in 1994. His discography includes 2 critically acclaimed full length artist albums, 8 DJ mix CDs, as well as numerous singles and remixes for artists such as Freq Nasty, Afrika Bambaata and Keoki. Along with DJ DB, Dara co-founded the nation’s first & largest drum ‘n bass record store, Breakbeat Science, in NYC which doubles as his own imprint, Breakbeat Science Recordings. He has been featured in countless magazine articles and interviews both in the US and worldwide. He previously hosted one of the internet’s most popular drum ‘n bass broadcasts, Velocity, where he regularly interviewed leading drum ‘n bass artists such as Jonny L, Kemistry & Storm, Trace, Ed Rush, Optical, Hype, Andy C, Zinc, and many others. Dara’s long standing relationships with the world’s drum ‘n bass elite gives him access to an astounding amount of new and unreleased material. His brilliant recording endeavors along with his incessant touring marked by consistently awe-inspiring DJ sets have made him one of the most recognized and well respected DJs in the country. After a lengthy hiatus, 2012 sees DJ Dara return to the studio to produce the kind of beats he wants to hear. Watch this space……

Bachelors Of Science – Few artists to emerge from North America’s drum & bass culture have made such a significant or enduring impact as San Francisco trio Bachelors of Science. Formed in 2005, the group has spent the better part of a decade writing memorable music, carving out an unmistakable signature sound that spans the full emotional scope of the genre. Choosing quality over quantity, they are regarded as one of the most consistently innovative and sought-after remixers and producers in the industry, working with everyone from dance music legends Groove Armada, Justin Martin and Paradox to indie darlings Home Video and Silver Swans. With their own productions the Bachelors continue to defy those that try to categorize them into a single genre. From the deep liquid over to the harder dance floor sounds of DnB, to the minimal inspired 170 vibes and even sun-drenched 4/4 grooves … the Bachelors have retained their quality and a large and loyal following throughout, garnering DJ support from Basement Jaxx, LTJ Bukem, High Contrast, S.P.Y, Spectrasoul, Mutated Forms, Storm, Loxy, Doc Scott, DJ Hype, Alix Perez, Grooverider, Claude von Stroke, DJ Marky, and many more. Their debut album “Science Fiction” released in 2008 to critical and commercial acclaim, became one of the top selling drum n bass albums of all time, with “Song For Lovers” and “The Ice Dance” becoming liquid drum n bass anthems and the Apex remix of “Strings Track” eventually winning “Best Drum n Bass Track” at the 2009 Beatport Awards. More recent remixes of The XX, Disclosure, Home Video, Death Cab For Cutie, Groove Armada and Seasick Steve have won praise across the music blogoshpere, placing them atop the Hype Machine chart for weeks in a row. On stage BoS bring an energy and vibe that is all their own and matched by none. Having performed across North America and all over Europe alongside acts as diverse as Pendulum, LTJ Bukem, High Contrast, Kode9, Photek, and even Elvis Costello, the guys take a crowd on a journey with everything from originals and bootlegs to custom edits of cutting edge tracks and past future classics. The latest BoS album entitled, “The Space Between”, released in May 2015 has been an immediate success even before it’s release with support from some of the biggest names in Drum & Bass including Lenzman, Teebee, Friction, AI, Doc Scott, LTJ Bukem, Nu:Tone and many more.