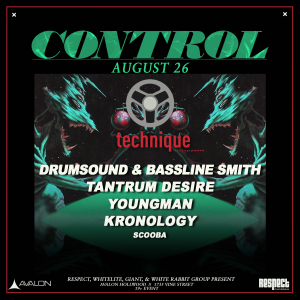 Drumsound & Bassline Smith – Drum & Bass would not be the same without Drumsound & Bassline Smith (aka Andy Wright, Benjamin Wiggett and Simon Bassline Smith). Together the trio have body-slammed dancefloors from Derby to Durban and established themselves as three of the finest Drum & Bass tastemakers on the planet, courtesy of the blue chip label Technique Recordings – an imprint that celebrated 10 years of killer dancefloor joints in 2009. The magic has been bubbling ever since Wright and Wiggett met Bassline Smith at one of Derby’s mentalist Technique club nights in the summer of 1998. The Drumsound pair had been crafting beats for a year, having originally started as a crew of six artists, while Bassline Smith had carved out a reputation as one of D&B’s most influential players, with a career stretching back to the early ‘80s. Together, they enjoy an impressively diverse arsenal of music that’s ensured their place atop the D&B scene for over a decade. A peep through Wright’s background and you’ll find he’s a classically trained musician with a strong background in indie rock – an ideal platform for harnessing the energetic groove that makes Drumsound & Smith’s productions slide over the dancefloor. His Drumsound compadre Wigget has been a diehard D&B head since the womb, while also tipping his hat to his Jamaican roots. Veteran Bassline Smith has been a funk and soul connoisseur for over 25 years and knows his way around a dancefloor blindfolded. Drumsound & Bassline Smith are also in hot demand from the most respected heads at Radio One and 1Xtra and enjoy regular flogging on the airwaves from the likes of Zane Lowe, MistaJam, Annie Nightingale and Annie Mac to name a few. Something which has led to the trio being playlisted across both BBC Radio 1 and 1xtra. The group are also one of the few artists to complete multiple mixes for the famed Radio 1, with a whisper of a request to complete a coveted Essential Mix in 2010. “We love them and have been supporting them since day one,” Mac tells. As their popularity begins to steamroll, so do the requests and as such Drumsound & Smith have issued re-rubs of songs including VV Brown’s ‘Leave’ at the request of Warner/Universal and Fugative – Supafly for Ministry of Sound. Radio 1’s Annie Mac also personally requested the crew complete a remix of Chipmunk’s no.1 anthem ‘Oopsy Daisy’ for her Mash Hitz segment. They also achieved an unlikely feat when they made the Eastenders theme dope, completing a re-rub for the E20 Music Competition set up by the BBC. Recent notable remixes include DJ Fresh’s #1 single “Louder”, Afrojack’s “Take Over Control” and even remixes for Daft Punk and Moby.

Tantrum Desire – Jay Faleye otherwise known as Tantrum Desire, is an electronic producer/DJ from London, UK. His love and passion for Drum & Bass music escalated since the early 2000s and has remained strong ever since. In late 2006, Tantrum Desire released tracks such as “Dreamscape” on Heavyweight Records. His music attracted many peers which followed onto DJ’ing at residential clubs in London, also receiving air time support from BBC Radio 1 & 1xtra. By late 2007, he was then picked up by Drumsound & Basslinesmith and signed to their very own Technique Recordings. Since then, the Londoner has had many releases leading up to his successful worldwide anthem “Reach” in 2011. An explosive single hitting over a million views on YouTube, holding the Number #1 spot on Beatport for over a month and being one of the most rotated singles in the Drum & Bass scene. This received great support from Radio presenters and DJs such as Zane Lowe, Fearne Cotton, Fabio & Grooverider, Annie Mac, Pendulum, Andy C, Benga & Skream, Sub Focus plus more. Dividing his studio time, Tantrum Desire has been busy with his live shows throughout the years, touring in many cities across the UK, Europe, USA and Australia. In addition to this he has affiliated with labels such as Universal Island Records, Ministry of Sound, 3beat, with also building a history in high demand remixes for likes of The Wanted, Laidback Luke, Rusko, Matrix & Futurebound, Wideboys, Utah Saints, the list goes on. In early 2015, Tantrum Desire released his single “Oblivion” featuring vocals from Solah, selected as one of UKF’s Top tracks of the year, taken from his debut album “Diversified” which was then released in the summer on 2015. The LP went in the Top 10 release charts on Beatport and was nominated Best Album at the Bass Music Awards sponsored by Sony. He supported the album with international tours, performing at clubs and festivals such as Ministry Of Sound, Avalon in Hollywood and Shambhala Festival in Canada.

Youngman – One of the UK’s most exciting and dynamic vocal talents, there’s little the dexterous Youngman (Simon Smith) hasn’t achieved success in, with a career only just beginning to bloom. 2010 saw Youngman link with Magnetic Man and dubstep don Benga in both the studio and live domain and signed to Shy FX’s mighty Digital Soundboy imprint. Now Benga’s choice MC for all worldwide tour dates, the duo have toured relentlessly over the last 12 months and recently headlined the Radio 1 In New Music We Trust event in Sheffield. Benga has also produced the lion share of his forthcoming debut album ‘Me & My Music’ which also features collaborations with Skream, Breakage, Kutz and more. The first ‘street’ single ‘Ho/One & Only’ was an instant smash across the UK underground, becoming Mista Jam’s ‘Jam Hot single’ and gaining massive support across the dubstep community. 2011 looks set to be the year Youngman breaks through. With his next single ‘Tear It Out/I Warned Ya’ (both produced by Benga) set for release and a touring diary busrting at the seams, keep you eyes and ears pealed. Youngman has well and truly landed.