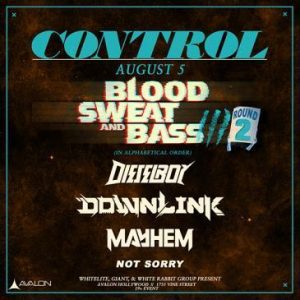 Dieselboy – At a time when headline “DJs” shamelessly play pre-programmed – even pre-recorded – sets and the masses mindlessly embrace the charade, Dieselboy – The Destroyer – stands out as a rare virtuoso of the art and craft of live DJing. His complex, high voltage, take-no-prisoners sets have created legions of loyal die-hard fans around the world. Arguably no other DJ mixes live – on four decks – with more precision, imagination, intensity, energy and finesse. In the history of electronic dance music, no one comes even close to matching his legacy of epic dramatic mixes, each a timeless star in his signature constellation. Dieselboy – one of the world’s finest technical DJs – has, in fact, elevated the themed DJ mix to the realm of fine art. For over two decades one of the world’s most influential ambassadors of drum and bass, Dieselboy (Damian Higgins) is America’s most iconic underground bass music curator and pioneer. Dieselboy is also a passionate connoisseur of books, film and food. He has written about and been interviewed about his obsession with food, and since 2014 his cooking skills have been displayed in professional kitchens around the world including pop-up hamburger events at restaurants in the Netherlands. He has collaborated on an artisan beer and a gourmet hot dog, and has a cocktail published in Robert Simonson’s (New York Times cocktail writer) new book “The Old-Fashioned.”

Downlink – A name firmly cemented in the hearts and minds of the bass music community. He is respected the world over as a producer of the highest quality dance floor bangers. He has had numerous #1 hits on Beatport and has released music with major labels like Rottun, OWSLA and Mau5trap. He has helped mix an album for the legendary nu-metal band Korn. He has toured the planet far and wide, leaving a wake of awe-struck audiences in his path. To see him live is to witness one of the tightest technical DJ’s in the game. His 4 deck live mixing and infectious stage energy light up venues turning crowds on their heads time after time. Expect lightning fast mixing on a journey through a wide variety of bass music. All tempos are fair game as long as its underground vibes and dirty bass. 2013 was a huge year for Downlink. Along with homies Excision and KJ Sawka, he gave rise to bass music supergroup Destroid, a whole different kind of live experience altogether. You really have to see it live to fully grasp the scope and intensity of the show. Also in 2013, Downlink launched his brand new record label, Uplink Audio. This will be a place where he will showcase his own music as well as a wide variety of other high grade material. Downlink is not one to be pigeon-holed and is constantly on a quest to evolve and refine his sound. With this in mind, one thing will always remain constant – a pure unadulterated heavy listening experience…

Mayhem – Chart topping, dance floor rocking, and taste making come naturally to Atlanta based DJ and Producer Mayhem. With over 15 years in the studio and the decks, he has garnished the attention of the heavyweights in every genre of his focus. Rooted heavily in Drum & Bass music, and with a discerning ear, Mayhem found himself making big moves from an early age. From releasing records for Andy C, TeeBee, Dieselboy, Noisia, and Black Sun Empire to DJing across the world for massive crowds in Japan, Australia, New Zealand, Europe and beyond; he has warranted a reputation for diversity and quality control. Collaborating with artists such as Noisia, Heroes x Villains, FKi, Le Castle Vania, Antiserum, Phace, Evol Intent, Sinthetix, Gein and Gridlok amongst many others, his production soared to new heights with “Exodus (featuring the legendary KRS-1)”, “Moonway Renegade”, “Choke”, and most recently a crossover album for Diplo’s Mad Decent Label “Transformers In The Hood”. Boundless inspiration pushed Mayhem to pursue Dubstep in it’s formidable years, immediately signing with the reputable Subway Records as well as SubHuman and Smog most recently. As of late his focus has been brought back to home on the forefront a movement combining Trap music with Dubstep, in addition to maintaining a healthy output of Drum & Bass, while working with Rap artists such as Tyga, Gucci Mane, Travis Porter, and Trouble. His club nights Transit, Fuck Yesss, Heavy, Haute Mess, Tambor Y Bajo, Service as well as regular events under Atlanta Dubstep have helped reshape Atlanta’s nightlife. No matter the genre, you are guaranteed a diverse set with attention to detail and a healthy respect for dynamics and balance.