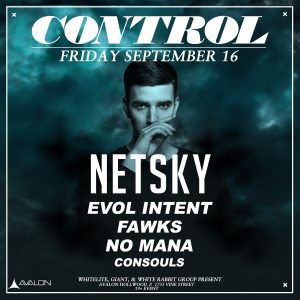 Netsky – Leading a wave of new skool D+B talent from Europe with his blend of uplifting, melancholic melodies and heavy dancefloor bass + beats, Netsky’s popularity as both a DJ and producer is second to none.He first came to Hospital’s attention with “Smile” and “Tomorrow’s Another Day” was quickly snapped up, signing exclusively to Hospital in late 2009. Netsky’s first release on Hospital was the iconic “Memory Lane” (as featured on “Sick Music 2″ in 2010) and this was swiftly followed up by his chart topping debut album – “Netsky”– in May of the same year. Following virtually unanimous praise and hype from all corners of the globe, it plunged Netsky firmly into the limelight, where he has remained ever since, delivering a potent mix of dancefloor anthems, vocal led classics and that clean cut new jungle sound which has become his trademark. Since then, Netsky’s profile as a remixer has been affirmed by his huge remixes of ubiquitous club anthems such as Pendulum – “Witchcraft”, Plan B, Leftfield – “Release The Pressure”, Audio Bullies – “Only Man”, Swedish House Mafia – “One” and most recently Jessie J – “Nobody’s Perfect” and Rusko – “Everyday” (which was included on the recently released “Fifteen Years Of Hospital Records” album).

Evol Intent – The turn of the century has seen many incredible innovations in the production and development of drum n’ bass. Over the past five years the genre has been broken, recast, and mutated into perhaps the most aggressive and visceral manifestation of music today. The Atlanta-based artists Evol Intent are among the greatest purveyors of this incendiary, modern jungle sound. Operating as a three piece power troop, Knick, Gigantor and the Enemy have produced some of the most ephemeral and progressive drum n’ bass to date. The outfit’s uncompromising and inimitable drum tirades left an indelible mark on the U.S. scene and the globe at large. Birthed out of hardcore-punk culture, the trio developed a unique method for wrecking soundsystems. The Evol Intent approach is unmistakable: combine dynamic drum mechanics, razor sharp edits, sawtooth synths and an element of discord resonant of their punk youth. In a very short period of time the group has amassed a substantial discography while recording for their own Evol Intent label as well as numerous prestigious imprints such as Renegade Hardware, Outbreak, and Human.

Fawks – East Coast-bred, West Coast-based producer FAWKS (Garrett Lockhart) has found his way from the D.C. underground to the main rooms of LA’s best clubs with a sound that confidently traverses genres,  unifying a wide range of sounds in to a single narrative. A graduate of the prestigious recording school ICON Collective, which produced Mak J, Jauz, Protohype, and others,  Fawks leaves no corner of the musical atlas untouched, pulling influences anywhere from UK bass-line to Indian bhangra, and all points in between.  with Releases on Ministry of Sound, Fire Power, & Vicious, and millions of plays online, FAWKS’ sound has put him front and center of the scene.  Past and upcoming collabs with his homies Ghastly, Jauz, and Kayzo, solidity his role as one of the true emerging talents rising from the LA underground.