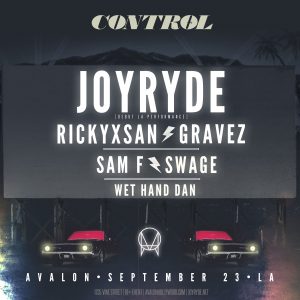 DJ Joyryde – Hailing from Windsor, Ontario overlooking the Detroit skyline was born and raised in Goa, India. He was brought up in the Goa Trance/Psy trance scene when it had just started. He is an extremely underground DJ who refuses to tarnish his reputation by going mainstream. He is famous for his weekly underground radio shows on Pirate Radio and various channels on Sh0utcast, and his weekly podcast on iTunes and MyPodcast. He is known for not fitting the norm and getting away from it and settling down with underground minimal techno which is extremely Detroit influenced. Give him a pair of vinyls and a mixer and you will see magic happen. He uses remodified Fruity loops software to be able to make his downtempo minimal sounds. His engineering skills can be seen in his djing and producing.

Rickyxsan – From humble beginnings experimenting with music in his home in the rough streets of East Los Angeles , to packing clubs and music venues throughout the US and soon throughout the world, Rickyxsan’s meteoric rise to the top of the EDM scene has been nothing short of a blast. Bringing his passion, creativity, and uncanny ability to make a crowd go absolutely berserk, Rickyxsan has attracted the attention of the genre’s most iconic artists including Diplo, Skrillex, Steve Aoki, Deorro, and countless others, some of which have used his tracks at some of the world’s biggest EDM festivals and in their own albums. With a rapidly growing fan base, Rickyxsan is quickly becoming a symbol for aspiring artists everywhere with the message that no matter where you come from or who you are, with fierce determination and a love for you music, anything is achievable.

Gravez – After accumulating over 4,000,000 plays within a time span of four months, 22-year old Atlanta-based rising producer Gravez has made a name for himself with reinterpreting music from the likes of Drake, Jaden Smith, Travis Scott, Rae Sremmurd, The Weeknd, Justin Bieber, Goldlink and much more. With his futuristic and artful style, you can expect the young and rising Atlanta native to expand his repertoire to much bigger things in 2015. Gravez has continuously provided stellar back to back releases whose sounds have accumulated the attention of collectives such as Soulection and HW&W Recordings as well as being featured on Hypetrak, Diplo & Friends, BBC Radio, Okayfuture, Hillydilly, DoAndroidsDance, Earmilk, Pigeons & Planes, Indieshuffle, Complex, DJ Booth, AshleyOutrageous and more. With artists like OG Maco, Rome Fortune, Young Thug and iLoveMakonnen pushing the envelope as emcees in Atlanta, Gravez his beginning to carve his own lane among the wave of producers creating unconventional backdrops helping Atlanta natives to stay ahead of the curve sonically. Gravez is now working on finishing up his debut ep, New Blood, which is set to release later this year as well as having much more in store for us this year between his original works, remixes and collaborations.