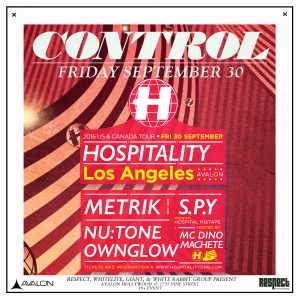 Metrik – Tom Mundell a.k.a Metrik is a London based DJ / producer who has been blowing the scene to pieces with his euphoric, rave-inspired productions. Already clocking up a sizeable back catalogue of releases on labels such as Viper Recordings, Spearhead and Shogun Audio, he signed exclusively to Hospital Records in October 2012. Known for impressing crowds across the UK, Europe and across the world with his peaktime dancefloor tunes featuring big hooks and catchy melodies, Metrik has certainly captured the imagination of many fans already and will undoubtedly continue to do so in the coming months and years. With diverse tastes ranging from Eric Prydz to Incubus, Pink Floyd to The Prodigy, Metrik’s love of music doesn’t stop there. An avid fan of 80s synth music, film music as well as dance music across the board, his influences span house, techno, trance, rock, soul and classical. Metrik’s first big break was in 2008, when he debuted with Your World (Instrinsic) which became an overnight liquid funk anthem although it wasn’t until the next release that he was catapulted into the spotlight when his track “Technicolour” gained Radio One support from Annie Mac and Zane Lowe and was also used as a sound bed for Barack Obama’s victory speech on Radio One! Following this came a slew of singles and EPs with notable releases including the sci-fi inspired “Between Worlds EP” (Viper, 2011) and most recently the smash hit “Freefall” (Viper, 2012) as well as remixes of Prydz, John B, Camo & Krooked, Ayah Marar, Rockwell, DJ Fresh, Dirtyphonics and many more.
[soundcloud url=”https://api.soundcloud.com/users/1146345″ params=”auto_play=false&hide_related=false&show_comments=true&show_user=true&show_reposts=false&visual=true” width=”100%” height=”450″ iframe=”true” /]
S.P.Y – Moving to London from São Paulo eleven years ago, S.P.Y was quick to establish himself within the UK drum+bass scene. After six months of working with only basic equipment, S.P.Y’s natural talent for production saw his first ever release signed to Metalheadz in 2005, with a release on Hospital’s Medschool imprint soon following in 2006. S.P.Y began collaborating with artists such as Marcus Intalex, Total Science, Kasra and DJ Marky. In 2009 S.P.Y released his first solo EP on Marcus Intalex’s label Soul:R and had releases on many other labels including Digital Soundboy and Innerground. The following years were immensely successful for S.P.Y, with Friction including five S.P.Y tracks on his MoS compilation and Andy C featuring four tracks on ‘Nightlife’. Proving his production quality and consistency in 2010 / 2011, S.P.Y delivered standout releases on Ram, Metalheadz, Critical, Shogun and Spearhead – Most notably the anthemic ‘By Your Side’. S.P.Y also took on high-profile remixes for the likes of Deadmau5, Claude von Stroke, LTJ Bukem, Chase & Status, Delilah and Zinc ft. Miss Dynamite, with S.P.Y’s own personal re-lick of Zero 7’s ‘In The Waiting Line’ becoming a signature in his live sets. Signing to Hospital in 2012, his debut LP, ‘What The Future Holds’ was released to critical acclaim. The LP not only received significant support from fellow artists and topped online sales charts, but was also awarded the coveted ‘Best Album’ at the annual 2012 Drum & Bass Arena awards. S.P.Y backed up this release with a relentless tour schedule of Australia, the United States, Canada, Russia, Asia, New Zealand and Europe. S.P.Y’s skills behind the decks rival his studio talents and he delights fans with an educated blend of old school classics and fresh new beats. Always one to stay true to his roots, S.P.Y has a unique ability to bring his trademark underground sound to a worldwide audience. Alternating between beautiful, orchestral, musical sets and dark, rolling mixes, S.P.Y captures the emotions of the crowd. Whether he is playing at a high-profile festival or an intimate club show, S.P.Y always delivers.

Nu:Tone – Since signing to Hospital in 2003, Nu:Tone has risen through the ranks to become one of the most highly respected producers in the scene, with everyone from LTJ Bukem to Sub Focus busting his tunes. Nu:Tone’s debut album “Brave Nu World“ dropped in 2005 with all of the Drum + Bass’ hierarchy supporting it. Following this, there was the stunning sophomore “Back Of Beyond“, which dropped in June 2007 with critics hailing it as “the perfect marriage of accelerated junglist funk and cooled-out 70s melody” (DJ Mag). As the lynchpin of the Future Sound Of Cambridge crew, Dan was instrumental in getting younger brother Logistics, Commix and of course himself into the studio to produce the devastating full length “Future Sound Of Cambridge 3“ in 2008. In the same year, Nu:Tone submitted his “Medical History“ in LP format. Early in 2010, Dan’s anthemic 12” release “Hyper Hyper” set the world on fire, championed by Sub Focus and featured on the “Hospitality D+B 2010″ compilation. 2011 also saw the release of Dan’s third album on Hospital; the inspired audio-visual concept “Words + Pictures”. Possibly Dan’s most ambitious project yet, the album was received very well, and the design even got a mention in The Guardian. Nu:Tone remixes are always guaranteed to please – whether it’s the retro soul of his “Spread Love” anthem or the junglist wobble of his “Strictly Social” re-rub or his incredible remix of Adele’s “Rolling In The Deep” or Emelie Sande – “Heaven”. Remix-wise, 2010 saw Nu:Tone busy re-shaping New Zealand Shapeshifter’s ‘”Long White Cloud”, Dekata Project’s “At Least We Can Dance” and Unicorn Kid’s “Wild Fire”.