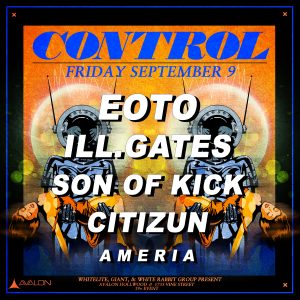 Eoto – As electronic influences continue to penetrate the live rock, jazz, and jam ethos, one band consistently rises to the top, bringing together fans from across the musical spectrum.  EOTO crisscrosses the country blowing out basement dives, packed theaters, and stages under the stars.  Check your festival schedules: this 100% improvised dubstep/breakbeat/house/drum & bass/trip-hop duo is the premier late-night party in the country. Throbbing bass and thudding beats are the signatures of this project from drummers Michael Travis and Jason Hann.  Born out of their shared love of electronic dance music, EOTO’s M.O. is to take the free-wheeling party vibe of a DJ set to the next level by using organic instruments, innovative performance technology, and uncharted musical exploration.  Live drums, guitars, and keys, and vocals are mixed, remixed, and sampled on the fly using cutting-edge programs.  This is all done without a script, and without a net. Hann plays a hyper EQ’d drumkit, chock full of multi-touch screens and MIDI controllers, and throws a number of effects on his otherworldly vocal styles.  Travis takes on subsonic frequencies, generating the band’s crushing low end with analog, digital, and software synthesizers, occasionally picking up guitar or a bass guitar and showing off his proficiency with instruments of all shapes and sizes. Hann, has been playing percussion professionally since the age of 12.  Years of collaborating, touring, and recording with the likes of Youssou N’Dour, Isaac Hayes, Dr. Dre, Loreena McKinnett, SCI, and a slew of other established artists running the gamut from Latin jazz to R ‘n’ B and soul allows him to move fluidly between styles. Adding to this is his depth in African and Latin drumming traditions, allowing the futuristic EOTO sound to keep itself rooted in the past. For the last 16 years, Travis has been the drumming octopus in SCI. He morphs roles to melodic multi-instrumentalist in EOTO, providing the raw basslines and harmonic tapestry that fill out the soundscape of the duo. Both Hann and Travis have the chops and stamina for physically demanding, EOTO improvised sets, which have been known to go upwards of 4 straight hours. “When we’re playing live for 3 hours a night, it’s like playing tribal drums in a ceremony,” Hann explains. “I’m looking at one person at a time out there, and thinking ‘what can I do to make you dance?'” An EOTO set is a nebulous beast.  Setlists are only broken up into tracks for the sake of posterity.  In reality, changes in mood, energy, and inspiration are reflected-in real-time-by rhythmic and melodic shifts.  The duo moves effortlessly from choppy dubstep to whip-smart, four-on-the-floor house to psychedelic trip-hop.  It’s a dance marathon, but everyone’s in it together. The EOTO set is dependent on crowd energy and activity, effectively breaking down the wall between artist and audience.

ill.Gates – A Toronto-born San Francisco based composer, performer and educator. Over the past decade, he has established a global fanbase and a reputation as one of the most dynamic electronic music artists around. He regularly tours across North America, Europe, Australia and Asia. Gates has headlined at such festivals as Burning Man, Shambala, the World Electronic Music Festival and the New Orleans Jazz Festival. His first full-length release, Autopirate (Muti Music, 2008) charted and continues to sell strongly. His album The ill.Methodology and accompanying online course are highly anticipated. Gates was recently selected as one of the Next 100 by URB Magazine. Many of his contemporaries cite ill.Gates as a key artistic influence and inspiration in their music. While on tour, Gates frequently teaches workshops to grateful and attentive audiences, in which he shares his highly effective approach to producing quality finished music as well as insights into the mentality and strategies necessary to succeed in the music business.

Son Of Kick – Based in London, DJ and multi-instrumentalist Son Of Kick is gaining a reputation from Berlin to Brooklyn for his bumping, super charged set, which is a bass-feast of heavy electro and dubstep. SOK has played on festivals and in clubs such as Gilles Peterson Worldwide Festival, the O2 Wireless or at Yoyo at Notting Hill Arts Club, to name a few. He has been co-producing alongside the French DJ/producer Simbad a new album for their collective project with Grems & Disiz La Peste (Rouge A Levre) as well as ongoing tracks with MikaMiki & Foreign Beggars. Son Of Kick’s sound has already been picked-up by various labels including recording tracks for the Stanton Warrior’s imprint, Beats Records, pioneering London imprint Botchit & Scarper and by Equinox Records from Berlin for his latest single “Guacha”. Recent remix credits include work for artists such as Tokyo Police Club or Husky Rescue and for labels such as Man Recordings (Germany), ESL Music (Washington DC), Civil Music (UK), and Om Records (San Francisco).