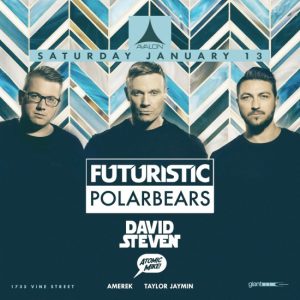 It’s fair to say that the Futuristic Polar Bears have had a phenomenal few years. Through their own relentless hard work and outstanding capabilities both in the production studio and behind the decks, the trio have been on an incredible ride and achieved the seemingly unachievable. With a combined skill set of accomplished DJs, producers and musicians, Luke, Rhys and Fran have become global favourites, having destroyed dancefloors in far flung destinations such as North America, India, Thailand, Singapore, South Korea, China, Jakarta, Kuala Lumpur, Holland, Italy, Kazakhstan and Ibiza with their indisputable energy and dynamic DJ sets. It’s these sets that have earned them shows at the biggest and best venues, including four of the top 10 clubs in the world; Octagon (Seoul), Zouk Singapore, BCM (Mallorca) and UshuaÏa (Ibiza), as well Ministry of Sound, Marquee and Zouk KL also in the top 50. Recognised for their effervescent progressive house sounds, in the last 18 months alone they’ve had releases on Revealed Recordings, Spinnin’ Records, Wall Recordings, Smash The House, Armada and Harem and gained consistent chart success with each and every release. Back To Earth became their first Beatport #1 in 2014, followed by a further 10 top 20s and a #25 US Billboard smash with Thundergod. It’s not surprising they were placed #40 in Beatport’s ‘Best of 2015 – Progressive House Artist’. They’ve been championed by the likes of KSHMR, Tiësto, Dimitri Vegas and Like Mike, Dyro, R3hab, Sander van Doorn, Firebeatz, Sick Individuals and most notably Hardwell. With several releases on his imprint under their belt, the Futuristic Polar Bears’ continuing relationship as part of the Revealed Recordings family saw them play the label’s stage at Creamfields 2014, taking over the decks from Hardwell himself following his set. An arsenal of unmissable collaborations with Danny Howard, Sultan + Shepard, Thomas Newson and Sandro Silva and with plenty more in the pipeline cement the Polar Bears as one of the most exciting production outfits in the industry right now. The trio’s thirst for music doesn’t stop there – their cutting-edge Global Radio Show dominates the digital airwaves, going out to over a million listeners in 42 countries across the world every single week. With a packed release schedule and a tour diary crammed with worldwide club and festival dates, there’ll definitely be no state of hibernation anytime soon for these Bears…