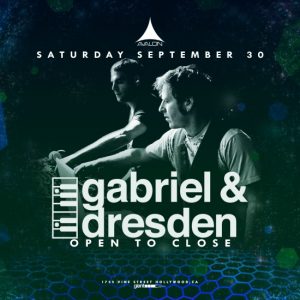 Gabriel & Dresden is the title of a project between American DJs and Trance producers Josh Gabriel and Dave Dresden from San Francisco. Both Gabriel and Dresden have collaborated together from 2001 to 2008 then again from 2011 to present day. With numerous singles and remixes under their belt, Gabriel & Dresden were aptly awarded with the Winter Music Conference IDMA award for “Best American DJ” twice in 2007 and 2008. They are signed to Armin Van Buuren’s Armada Music, which brought forth Gabriel & Dresden’s mix compilation titled Mixed for Feet, Volume 1. In 2014, Gabriel & Dresden restarted broadcasting on their radio show “Gabriel & Dresden present Organized Nature” on Digitally Imported’s progressive channel and that was the same year they released their hit single “Rise Up”, which was supported by a variety of big name artists like Above & Beyond, Eric Prydz, Armin Van Buuren, and Markus Schulz.