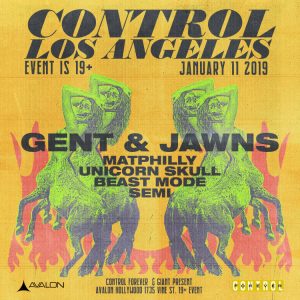 Gent & Jawns is the long running project of club music pioneer, Long Phung. Starting with an early career ofthrowing wild parties in Richmond, VA, Gent & Jawns has become one of the most consistent, hardest touring acts in North America.

Gent & Jawns broke out with a collaboration with Diplo on the now classic, Express Yourself EP. That was quickly followed up with a Mad Decent record deal and the release of the massive “Turn Up” cementing Gent & Jawns as one of the most exciting names in dance music.

Highlights since then include collaborations with Major Lazer, remixes for Diplo, Skrillex, Yellow Claw and more as well as iconic tracks such as “Swizzy,” “Mahal,” & “Fireball.” Gent & Jawns has toured the world and shared the stage with acts such as Flosstradamus, Major Lazer, Troyboi and more.

In late 2017 Gent & Jawns signed to Monstercat and will release the first track of “The Meaning” EP on Nov 17.