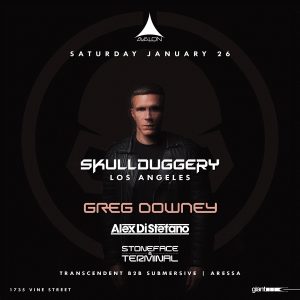 Having graced the decks on almost every continent, the Belfast born Greg Downey is no amateur when it comes to the art of DJing. Having impressed the promoter of Gategrasher while playing at an afterparty in Ibiza, Greg was asked to play at Space the following week. Very shortly afterwards, Greg broke through the UK trance scene playing at major shows such as Gatecrasher, Godskitchen, Slinky, Inside Out, Goodgreef, and Passion. What was every aspiring DJ’s dream to travel the world soon became a reality for Greg. He was crisscrossing the globe flying from New York City to Sydney to Ibiza to Shanghai to Buenos Aires to London playing to massive crowds.

Greg recorded his first “Live As album” on Discover from the mega Planet Love festival in Northern Ireland, which captured Greg’s energy as a DJ and was featured as “Album of the Month” in Mixmag. Soon the prestigious BBC Radio One came calling and Greg appeared as a guest on Eddie Halliwell’s radio show. It came as no surprise when Greg was voted into DJ Mag Top 100 poll coming in at number 82. This was a huge accomplishment for such a young talent.

As Greg’s DJing career was taking off, so were his productions. Catching the attention of John Digweed with his remix of “Heaven Scent”, Greg solidified himself as a producer when his remix claimed the number one spot on Beatport for over a month. His remix was championed by Sasha, Eric Prydz, Paul van Dyk, Tiesto, Armin Van Buuren and John Digweed. Greg was then snapped up by Paul van Dyk for his label Vandit. His first release “Stadium” was a huge success which became Mixmag’s Cream Ibiza anthem of 2008. Greg was also chosen by Paul van Dyk to remix his track “New York City” which appeared on his “Hands on In Between” album.

Working tirelessly in the studio, Greg started to produce hit after hit. His track “Global Code” on Vandit was featured in every Paul Van Dyk’s set for close to a year and his following single Show Time for Dutch heavy weights Spinnin was No. 2 on Beatport. Having teamed up with the lead singer Paul Draper from Mansun in 2010 to remake their classic track “Wide Open Space,” it became the track of the year having crossed over to daytime Radio One with support from Scott Mills and Vernon Kay and was chosen by Mixmag as their tune of the month. This track was later snapped up by major label EMI for a full release.