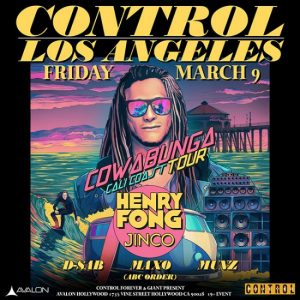 LA-based by way of Orlando, Florida, dreadlocked DJ/producer Henry Fong has been on a production tear over the past few years, culminating in a pretty spectacular 2013 that saw tracks like “Hot Steppa”, “Revival”, “Jump”, and the massive “Encore” with MAKJ destroying charts and dancefloors with equal abandon.

With support from a who’s-who of dance music (Hardwell, Avicii, Armin Van Buuren, Calvin Harris, Knife Party, Bingo Players, Tommy Trash, Zedd, Knife Party, Hardwell, Kill The Noise, and more), gigs all over the world and festival appearances under his belt, the man ain’t stopping for nathan. He got into dance music around ‘07 while attending University of Central Florida, and after graduation in ’09 he’d picked up DJing as a way to avoid the real world and pay the bills.  Turned out to be a good choice.

In 2010 Fong established the successful electro night Riot!, his first weekly party in Orlando, and by ’11 he’d caught the producing bug.  The roller coaster took off from there and the past three years have seen the birth of one of the fastest rising names in big room EDM. With influences rooted in the early stages of the last electro wave (MSTRKRFT, Justice, Crookers, Fake Blood, and early Dim Mak), and mid-90’s hip hop, he’s developed a DJ style that has been characterized as club-friendly with flawless transitions and inspired mash-ups. “A lot of that music from that time was really fun, dancy and clubby so I always try to make my music and DJ sets really club friendly, and now I have been trying to incorporate that into the big room stuff I have been into lately.”

Fong considers himself a DJ first and his production skills reflect it, having grown out of the work he did putting together tweaks and edits to personalize his sets.  From mashups and edits to bootlegs and remixes and now into original production, the path has been clear, if not always smooth, and he has stated that it took a lot of time and effort to make the transition from DJ to producer. When he’s not making the music that makes you dance, you’ll probably find him surfing.