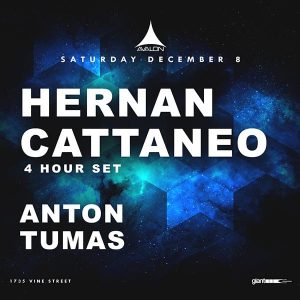 As the head of Sudbeat Music and the guru of the emerging South American house music scene, Hernan Cattaneo has become a renowned DJ back when he released a mix on the classic Renaissance Masters mix series in 2004 alongside legends John Digweed and Sasha as well as having a place for a decade on DJ Magazine’s Top 100 poll. Aside from spinning at acclaimed nightclubs in Europe, Cattaneo has also seen himself behind the decks at international festivals performing for massive crowds.

Anton Tumas––known for his singular style of house, and inspired by Burning Man and California’s deserts, the LA resident is openly inspired by the best of the best, including John Digweed and Lee Burridge. Getting his start in none other than Hollywood, he knows the ins and outs of the city’s burgeoning electronic scene and is well-versed in warming up a dance floor.