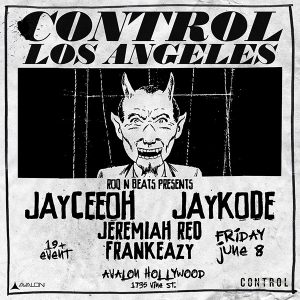 Jake Osher, more popularly known as Jayceeoh, is a Los Angeles based Producer/DJ and world-renowned turntablist. In 2014, Jayceeoh gathered support from the likes of A-Trak, Diplo, Bassnectar, Borgore, The Bloody Beetroots, MAKJ, and TJR, to name just a few. His bass heavy production has also captured the attention of the music industry as a whole, and some of the largest online music platforms such as Dancing Astronaut, THUMP, Vibe Magazine, Gotta Dance Dirty, Run The Trap, and Earmilk. His debut original release titled “DAMN,” a collab with fellow tunrtablist, DJ Scene, released on “Fools Gold Records” in November of 2013. Since then, he’s seen releases on Dim Mak, Buygore Records, Smog Records, Ultra Records and Atlantic Records. Some of his more notable collaborations include SBCR (The Bloody Beetroots), Caked Up, Styles&Complete, Riot Ten and others. In addition to these official releases, Jayceeoh was also crowned champion of VH1′s “Master of the Mix” TV show in mid-2013 after competing on 10 episodes on the network.

In the club circuit and live performance realm, Jayceeoh has maintained premier residencies for years across the country in some of the most notable venues in the United States. He’s also been afforded the opportunity to play in over 32 countries worldwide and on some of the biggest stages, including iHeartRadio Festival in Vegas, TomorrowWorld in Atlanta, EDC Mexico, Fresh Island Fest in Croatia, Das Energi in Salt Lake City, Lights All Night in Dallas, Hellow Festival in Mexico City, and Empire Music Festival in Guatemala. Jayceeoh also headlines regularly in Las Vegas at Drai’s Nightclub, The Light Nightclub, and DayLight Pool at Mandalay Bay. As an LA native, he’s made headline appearances at Create Nightclub, Avalon, and Sound Nightclub, to name a few.

JayKode is the moniker of Joey Khodanian, a Los Angeles-based EDM producer who fuses classical-inspired melodies with bombastic trap, dubstep, and electro-house beats, dubbing his sound “classical bass.” He began studying piano at age seven before taking up guitar as a teenager, then interested in metal and hardcore. After getting into hip-hop and electronic music, he started developing his style of aggressive yet dreamy bass music. His track “The Gregorian Life” was released by Dirt, Lies & Audio Black in 2012. Since then, he began appearing on dubstep and trap compilations, and he remixed songs by Beyoncé, A-Trak, Galantis, and others. His tracks were played by well-known DJs such as Diplo, Skrillex, DJ Snake, and others. Throughout 2015 and 2016, numerous JayKode singles were released by labels like Elysian Records, Unborn Records, and Borgore’s Buygore. He also collaborated with Party Thieves on a track called “Origin” and remixed the Chainsmokers’ “Closer.”