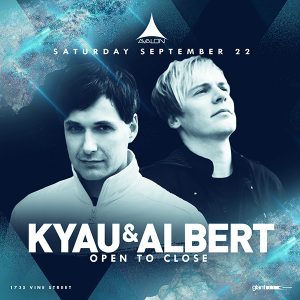 Ralph Kyau and Steven Moebius Albert are known to the EDM world as Kyau & Albert.

The two Germans have produced such massive club hits like “A Night Like This”, “Another Time”, “Velvet Morning”, “Kiksu”, “Megashira”, “Are You Fine?” and so much more. One little known K&A fact: all male vocals come from Steven Moebius Albert himself!

In 1997 Kyau & Albert founded their record label Euphonic, which is one of the top brands today.

Their successful debut artist album “Here We Are Now” was released on 3 continents. They remixed some of the biggest names in club land like Faithless ft. Dido, Armin van Buuren, Kosheen and so much more.