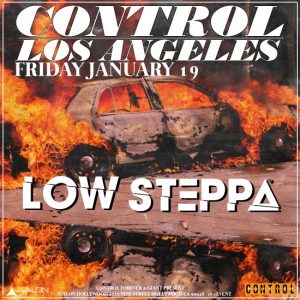 Low Steppa needs little introduction. Since the early years of this millennium he’s been producing some of the finest bass music around under various guises, whilst touring the globe and rocking some of the world’s best parties – from EDC in Los Angeles to Womb in Tokyo. His own imprint Simma Black Records is going from strength to strength, with Simma Black releases becoming a staple in many a DJs crate, and with his own Simma parties packing clubbers in. As well as his solo productions, through several aliases and collab projects like Twocker, Rudi Stakker, Bass Weazal, Dreadstemz, Punk Rolla, Will Bailey, Low Steppa remains very much at the forefront of the bass music scene, with his productions gaining support from some of the industry’s biggest names including Kenny Dope, Todd Terry, Joris Voorn, Amine Edge & Dance, Huxley and Shadow Child. On top of which, recent radio support has come from the likes of Mista Jam, Cameo, Target, B Traits, Toddla T, Zane Lowe, Kissy Sellout and the Wideboys.
With a constant flow of releases and remixes coming, as well as a solid calendar of touring, Low Steppa will be stepping things up yet another level.