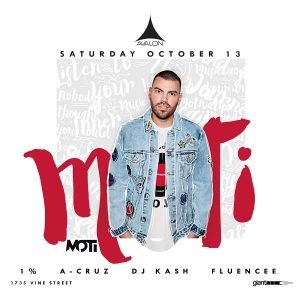 MOTi is a world renowned artist who has produced hits for multi-platinum artists such as Ty Dolla $ign & Wizkid and worked alongside legends like Tiësto, Major Lazer & Martin Garrix. Due to his profound abilities, he has been able to produce many club hits including the fan-favorites “Virus” and “Boom”. However his multifaceted style has also been shown through his successful remixes for artists such as P!nk, Major Lazer & Dj Snake, and Flo Rida, among others. His talents aren’t solely limited to the studio for he has had multiple outstanding sets for the likes of Ultra Music Festival Miami, Tomorrowland (Belgium and Brazil), Electric Daisy Carnival (Las Vegas, NV US), EZOO (New York, NY US), amongst many others.