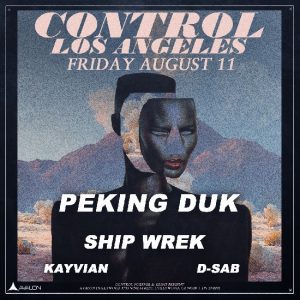 Hailing all the way from Australia, Peking Duk, is an electro house and alternative dance duo consisting of DJ Adam Hyde and Reuben Styles. The two formed back in 2010 and gained significant exposure with their remix of Passion Pit’s, “Take a Walk”. Since then, Peking Duk has released multiple singles and an EP catching the attention of millions worldwide and landing them top 5 spots on the ARIA Singles chart and triple platinum certifications. In 2014 they won the ARIA award for Best Dance Release for their huge hit, “High”, and was immediately signed to RCA Records. Peking Duk has been touring continuously around the world since, playing shows in Australia, Asia and North America and gaining international support from Steve Aoki, Tiesto and A-Trak.

Collin Maguire aka Ship Wrek is living proof that you can never be too young to start creating electronic music. The 17 year old producing prodigy from Richmond, Virginia released his first EP in 2016 and since then has cosigned with electronic’s biggest artists such as Diplo and NGHTMRE. Ship Wrek is now signed to Spin Artist Agency and is setting out on his first official tour in June of 2017. His newest single, “Vessel” with Zookeepers and Trauzers was released only two months ago but has already amassed over 265k plays on Soundcloud.