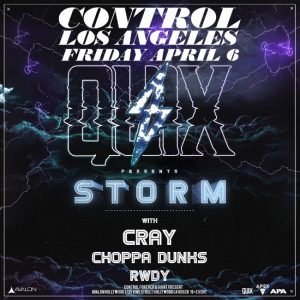 QUIX is one of trap’s most respectable music producers and his devoted fanbase is a testament to his expertly-crafted sound. With high energy tracks such as “Rat Traps” featuring Gucci Mane and his remix of “Right Here” by Keys N Krates, QUIX has proven himself to be a master of bass music production. Also known as a master on the decks, QUIX has been wreaking havoc in venues worldwide with his ability to blend track after track effortlessly.

Cray, whose incredible skills in production and live mixing are easily apparent when she’s throwing down her sets. As one of the handful of modern female trap producers, Cray’s been living it up with bass heavy bangers such as “BTFU” and “Up in Smoke.”