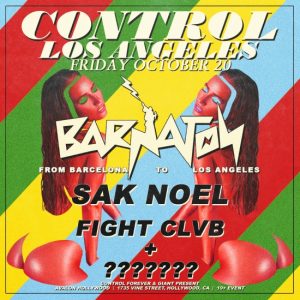 International Dance Music Award winner and Latin Grammy nominee Sak Noel is back in the states to deliver fans a sweet taste of his global takeover. As the first-ever Catalan DJ at #1 on the BBC Singles List, he’s known for his chart-topping hits including “Loca People” and “No Boyfriend”, both viewed well over twenty million times on YouTube. Since then, Noel has established his own label Barnaton, releasing a collaboration alongside throwback king Sean Paul called “Trumpets” – an electro-reggae bop to groove on the dancefloor to.

Fight Clvb, an idiosyncratic trio consisting of SAV, his mysterious hype man Mystereo, and Carly Burns. With a hardstyle foundation fused with reggae and mambo, this dynamic group will be sure to bring extra vibrancy to AVALON’s dancefloor.