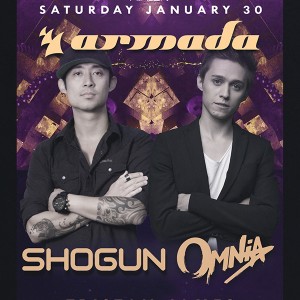 Shogun – American producer, Andrew Chen aka Shogun, is the first Asian DJ and producer to be signed to S107/Armada. Whether it is remixing for the world’s number one DJ – Armin van Buuren, or for Grammy nominated singer and songwriter Nadia Ali, Shogun’s productions have gained him full support from the biggest names in the industry including Ferry Corsten, Paul Van Dyk, Above & Beyond, Armin van Buuren, Gareth Emery, and Markus Schulz just to name a few. With some of the biggest anthems to date, ‘Save Me’, ‘Imprisoned’, ‘Run To My Rescue’ and ‘Skyfire’, Shogun has cemented his place as one of the most influential and biggest trance/progressive acts today and his songs have regularly been featured on the world’s leading radio shows such as Vonyc Sessions, Trance Around The World, Corsten’s Countdown, Global DJ Broadcast, and A State of Trance Radio Show – [32 ASOT plays / 5 Future Favorites]. Voted into the DJ Mag 2011 world rankings at #122, Shogun has headlined events across the globe and also served as resident DJ for the prominent Ministry of Sound nightclub for over 3 years. His exclusive nine hour sets at the superclub set the standard for epic nights that can only be described as an emotional and amazing journey. These sets were also broadcasted live on Ministry of Sound Radio to thousands of listeners worldwide.

Omnia – Without doubt the most exciting and fast rising name to emerge from the progressive & trance scenes this past 18 months is young Ukrainian DJ / producer Omnia who recently jumped into the Top 50 in the prestigious DJ Magazine Top 100 DJs poll at #48. Having already made waves as a standout, festival rocking DJ in his homeland in recent years, Omnia has recently transformed himself into a breakout and in-demand producer on a global scale after dropping a devastating sequence of releases that have included several Beatport #1s. As with the rise of Arty before him, Omnia has picked-up the baton to lead the Eastern European EDM takeover in 2013 with notable highlights in a packed DJ schedule including festivals such as Global Gathering UK & Ukraine, Ultra Argentina, A State Of Trance 600 Holland, Trancefusion Czech Republic, Summadayze Australia as well as global club brands such as Ministry Of Sound, Zouk, Papaya, Privilege & Eden Ibiza, Ageha and Ellui. Omnia’s imagination was first captured by dance music sounds as a young boy in the late 90’s and early 2000’s. By his late teens Omnia had started to experiment with music production with a particular love of trance, but with influences drawn from many genres that have been his passion for over a decade. Self-taught in the studio, Omnia’s sound has a distinctive edge and a style that refuses to be pigeon holed. His productions started to gain international recognition in 2011 with the likes of Armin van Buuren and Markus Schulz supporting his early releases which included a remix of Arty & Mat Zo ‘Rebound’.