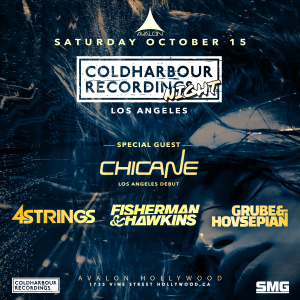 Chicane – Chicane (Nicholas Bracegirdle) is one of the most prolific producers, composers and hit makers born out of nineties club culture and the trance music scene. He has six albums under his belt since his seminal debut in 1997 ‘Far From The Maddening Crowds’ which gave him his first UK top 20 chart position with the ground breaking ‘Offshore’. Chicane has also co-written and produced for Bryan Adams, Cher, Natasha Bedingfield, Paul Young, William Orbit, Ferry Corsten, Owl City, Kate Walsh, Christian Burns and Armin Van Buuren.
[soundcloud url=”https://api.soundcloud.com/users/3818781″ params=”auto_play=false&hide_related=false&show_comments=true&show_user=true&show_reposts=false&visual=true” width=”100%” height=”450″ iframe=”true” /]
4 Strings – No Bio Available
[soundcloud url=”https://api.soundcloud.com/users/5487753″ params=”auto_play=false&hide_related=false&show_comments=true&show_user=true&show_reposts=false&visual=true” width=”100%” height=”450″ iframe=”true” /]
Fisherman & Hawkins – Fisherman & Hawkins (Isaac Vissers and Rob Koopmans) have already been in the ‘E.D.M’ (Electronic Dance Music) scene for a number of years. Late in 2011 Fisherman & Hawkins was born, they realised there was a great level of understanding between them combined with complementary production qualities, making it the natural step to form the now fast-rising duo. The boys debut original titled ‘Perlas’ saw them collaborate with highly respected Mark Sixma, receiving support from across the globe with its release on Armada’s sub-label ‘Captivating Sounds’. This collaboration received airplay on world renowned shows such as Armin van Buuren’s ‘ASOT’ and Sean Tyas’ ‘Tytanium Sessions’. on from this the boys locked themselves away in their studio. Another rip-roaring track ‘Nightshift’ was the end result. If they needed affirmation of Nightshift’s impact, they received it in the form of Markus Schulz immediately signing it to his imprint ‘Coldharbour Recordings’. The buzz surrounding this release was immense after Markus had aired it several times his radio show ‘Global DJ Broadcast’. The demand for a follow-up was instant, as dust begun to settle from the previous release, this dynamic Dutch duo delivered ‘Apache’. It was first received by the crowds of infamous ‘Scream’ release parties in Miami and New York, as well as Toronto’s ‘Labour of Love’, the response was resounding and can only be described as a ‘game-changer’. A few months later saw them secured appearances on Markus Schulz’s ‘World Tour Best of 2012′ compilation and KhoMha’s ‘Coldharbour Presents’, as well as airing multiple times on ‘A State of Trance’ radio show. Apache was set to trail-blaze Prague’s Transmission in January, as well as the upcoming ASOT 600 , having now been on rotation for 6-months in a host of the worlds most renowned DJ sets. With a monthly podcast on the horizon, Isaac and Rob are ready to connect with the ‘Apache Warriors’ and the world, whilst sharing their own take on modern day Trance!
[soundcloud url=”https://api.soundcloud.com/users/21425687″ params=”auto_play=false&hide_related=false&show_comments=true&show_user=true&show_reposts=false&visual=true” width=”100%” height=”450″ iframe=”true” /]