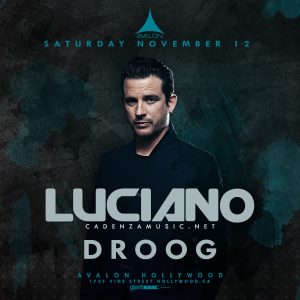 Luciano – In the beginning, DJs were faceless human jukeboxes that played at the whim of their audience. When dance culture boomed DJs became superstars, and fame and ego replaced love of the music. Luciano represents a third way: he is both a single-minded artist completely devoted to music, and a performer whose charisma is an intrinsic part of his global appeal. Luciano fuses art and fame like no other DJ. As a result the humble, Swiss-Chilean DJ, producer and boss of Cadenza Records is one of the biggest stars of the global electronic music scene. Born in Switzerland and raised in Santiago, Luciano fell under the spell of Detroit heroes like Juan Atkins and Model 500. Determined to share his passion for techno, he spun records in clubs where disgruntled rock fans stubbed out cigarettes on his vinyl. Undaunted, the teenage DJ continued, gradually winning a loyal following and pushing dance music to new heights in Chile. Not only DJ’ing but also promoting Sense Club and Encuentros Con La Technocultura in Santiago de Chile in the company of many pioneers of the Latin American Electronic Music Scene: Senor Coconut AKA Atom Heart, Ricardo Villalobos, Dandy Jack & brother Adrian Schopf, Washington Miranda, Argenix Brito, Micron and more. By 21 his DJ career was blossoming and he was playing to thousands at Santiago’s Love Parade. His love of music had brought him fame. Most DJs would stop there but Luciano’s outstanding characteristic is his refusal to rest on his laurels. “In life always you have an easy way and a complex way,” he says. “The complex way has more rewards.” and true to his words he forged ahead and moved to Europe. Determined to push himself to new heights and on a new continent , he gradually invaded the inner reaches of electronic culture, thanks in part to South American associations like Ricardo Villalobos and Pier Bucci, but ultimately finding and refining his own unique sound and style, a combination of irresistible, mind-altering blend of barebones techno and hot-blooded Latin rhythms. Starting with a string of outstanding EPs, remixes and special projects on acclaimed imprints such as Perlon, Peacefrog, Poker Flat, M_nus, Desolat, and Cocoon, Luciano founded Cadenza Records, a label that’s become synonym with pushing the boundaries of the Dance scene with its iconic, one of a kind style and image thanks to a widely recognized and devoted group of artists and producers following in the steps of their charismatic leader.

Droog – Over the course of 8 eventful years since their genesis as the Droog collective, the Los Angeles-based trio – Andrei, Brett & Justin – have become true Renaissance men of underground dance music. Sprung from their DJ roots in late 90s/early ‘00s, Droog have taken on (nearly) all of the essential mantles: label heads – since 2009 their Culprit outfit has become a real force in the new “Deep” dance music movement; promoters of considerable experience and renown – their party series long a hometown institution, took on a global reach with events spanning Europe and the Americas; and producers – solo or with steady collaborator Inxec, they have infiltrated some of the top dance music labels like Crosstown Rebels, Get Physical, Supernature, Last Night on Earth, Noir and Akbal. Droog has now emerged as a touring DJ unit with a suitcase-full of highlights, from 4 appearances at the beloved Fabric in London, the twin Berlin clubbing institutions: Watergate and Renate, and Paris’ legendary Rex to memorable shows in Peru, Australia, Russia, Portugal, Ecuador and beyond.
[soundcloud url=”https://api.soundcloud.com/users/1848686″ params=”auto_play=false&hide_related=false&show_comments=true&show_user=true&show_reposts=false&visual=true” width=”100%” height=”450″ iframe=”true” /]