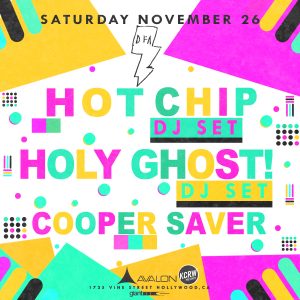 Hot Chip – One of the most distinctive and innovative bands combining dance music and indie in the 2000s and 2010s, London’s Hot Chip made their mark with the release of their 2000 debut, Mexico. The EP was a hypnotic wash of nearly subliminal, pulse-like techno beats, acoustic guitars, and plinky pianos, but the vocals were the true star of the show. The voices of Alexis Taylor and Joe Goddard are a fine study in contrast: Taylor’s dreamy, effortless falsetto cuts to the heart of the beauty of performers like Jeff Buckley and Nick Drake, while Goddard’s cool monotone sounds world-weary and gruff in comparison. Self-released by Hot Chip in 2002, Sanfrandisco E-Pee dabbled in more playful sounds, from the beatbox dubbing of the title track to the closing notes of “Fanta,” in which Taylor pleads with the listener to “make sounds of the summer.” The group signed to revered N.Y.C. record label DFA in 2005 and released the Over and Over EP, as well as the excellent 2006 full-length The Warning, which was followed by a DJ-Kicks mix album in 2007. Late that year, the Grammy nominated single “Ready for the Floor” heralded the arrival of Made in the Dark, which featured some of the band’s most focused grooves and poppiest melodies to date. The mellower One Life Stand followed in 2010, along with a remix collection later that year. Hot Chip left DFA for Domino, which released the more uptempo, experimental In Our Heads in 2012 and the following year’s Dark and Stormy EP. The band returned in 2015 with Why Make Sense?, which found them reuniting with In Our Heads producer Mark Ralph and exploring sounds ranging from disco to ’90s R&B to post-punk.

Holy Ghost – Friends since attending elementary school on the Upper West Side of Manhattan, Alex Frankel and Nick Millhiserwere members of Automato, a rap group whose last releases, including a self-titled album released in 2003, were produced by the DFA’s James Murphy and Tim Goldsworthy. After Automato dissolved, Murphy and Goldsworthy encouraged Frankel and Millhiser to continue pushing toward dance music. Push they did; Frankel and Millhiser co-produced the warm and melodic “Hold On” with the DFA — settling on the Bar-Kays-referencing Holy Ghost!just prior to the vinyl pressing stage — and released it on the DFA label in October 2007. “I Will Come Back,” their second single, didn’t come out until 2009 but made an impact with its video — a remake of the indelible clip for New Order’s “Confusion,” a snapshot of New York’s clubbing scene (with producer Arthur Baker reprising his role). The four-track Static on the Wire EP followed in 2010, continuing the duo’s uncanny ability to evoke the colorful, layered sound of early- to mid-‘80s club music. In 2011, Holy Ghost! released a self-titled album that included some of their previously released songs, as well as a guest appearance from the Michael McDonald on the closing “Some Children.” By that point, Holy Ghost! had also become one of the more prolific remix teams; they had re-worked (in some cases technically covering) tracks by MGMT, Moby, Cut Copy, Phoenix, the Juan MacLean, and Murphy’s LCD Soundsystem. Their second album, Dynamics, was released on DFA in 2013.