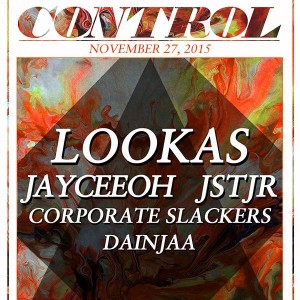 Lookas – Mixing trap and EDM like Diplo, but putting a glitzy, Miami spin on it, producer Lucas Rego became better known as LooKas beginning in 2013. It was that year the LooKas remix of “Tsunami” by DVBBS & Borgeous dominated dancefloors, while 2014 saw LooKas break out with his own single, “Anger,” which debuted on the BBC Radio 1 show Diplo & Friends. Later that year he appeared alongside Sage the Gemini as a featured artist on Flo Rida’s single “GDFR.”

Jayceeoh – Producer and world-renowned turntablist, has become one of the most revered and respected DJs in all the business today. In 2014, Jayceeoh gathered support from the likes of A-Trak, Diplo, Bassnectar, Borgore, Flosstradmus and The Bloody Beetroots, to name just a few, with his original production and remixes. His electro and bass-driven tunes have also captured the attention of the largest online platforms, including Dancing Astronaut, Gotta Dance Dirty, THUMP, Earmilk, Vibe Magazine, The DJ List, EDM Network and Run The Trap, amongst others. Since Jayceeoh’s years competing in the DMC world championships, to bringing home the title of “Master of the Mix” on VH1 in 2013, this Los Angeles based producer and DJ has become one of the fastest rising producer talents in the US today. Releasing music on Fool’s Gold, Ultra/Sony Music, Buygore Records, Atlantic, and Smog Records, Jayceeoh continues to push the envelope forward with no signs of slowing down. To date, he has played some of the biggest venues and festivals around the world, including iHeartRadio Festival in Las Vegas, Lights All Night in Dallas, EDC Mexico in Mexico City, Empire Music Festival in Guatemala, Sweetwater Festival in Atlanta and more. He also toured with The Bloody Beetroots as direct support on their 2014 North America tour, and with 2 Chainz and Pusha T on select dates on their 2014 “2 Good 2 Be TRU” tour. His ability to crossover between EDM and Hip-hop can truly only be rivaled by the likes of A-Trak and Diplo.

JSTJR – JSTJR’s music is best represented by imagery and emotion rather than derivative subgenres and labels. Walk into the most thumping nightclubs and sweaty, wall-shaking basements from Lisbon to Los Angeles to Lima and you’ll understand the 24-year-old producer’s global sound that has earned him official releases on dance music’s top labels including Mad Decent, Fool’s Gold, and SMOG.Hailed as the US ambassador of Buraka Som Sistema’s zouk bass movement in America, the New England native has forged a love for regional sounds from around the world with his inherent tendencies for hip hop and experimental electronic production. This unique, hybrid and inclusive approach to dance music in a growingly homogenous market has earned him nods from an elite group of producers including Skrillex, A-Trak, and Diplo – the last of whom JSTJR worked with directly as a credited artist on Major Lazer’s Peace Is The Mission in 2015.