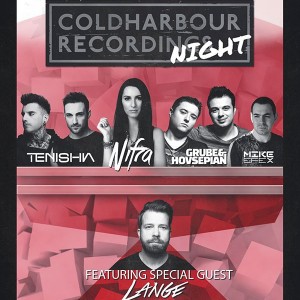 Tenishia – Tenishia’s story started in Summer 2004 when Joven Grech and Cyprian Cassar met through mutual friends and joined forces for music production after a discussion about music in a small bar. Joven was already into djing for a few years while Cyprian had a perfect ear for good melodies due to his classical music background of playing the piano and other musical instruments from a very young age. Eventually their work in the studio paid off as they signed their first production to Armada in 2005, following with three big hits with Kirsty Hawkshaw on Armada’s top label Armind. One of which was ‘Outsiders’, which made it to big compilations such as ‘Ministry of Sound’ and ‘Cream Ibiza’ , got chosen as ‘One for the Weekend’ on BBC Radio and transformed Tenishia from national to international stars as their music got to the hands of some of the World’s biggest names. Even though, Tenishia were already climbing the success ladder back in the home country of Malta with numerous gigs, including a booking at the MTV Summerdance Event and Creamfields, Tenishia got their biggest break trough in Malta when the World’s number one DJ, Armin van Buuren introduced them on stage while playing their already popular radio track ‘Burning from the Inside’. This sealed the deal, as it was the first time ever that such a big DJ played a locally made track which led to a whole revolution of a Club DJ on the island of Malta by inspiring young talents and already established DJs into music production.

Nifra – Nifra has in a vast couple of years gone from being a local talent in central Europe to one of the most popular figures in the Markus Schulz “Coldharbour” entourage. With releases such as Dark Harbour, Ransvik and more she has taken the throne as the “Queen of Coldharbour”. She kicked of her DJ career back in 2008 and learnt her trade playing alongside and supporting such acts as Armin van Buuren and Tiesto in her home country of Slovakia which lead to her becoming quickly recognized as a massive potential future talent. We fast forward a few years to the present and now an accomplished producer and world renowned DJ in her own right, Nifra has now played countless shows around the world including Armin Van Buurens massive annual, “A State of Trance” party, Ultra Music Festival in Miami as well as multiple appearances all over Europe, North America and Asia. Her music regularly finds itself in the DJ wallets of the top names of trance such as Armin van Buuren, Markus Schulz, Gareth Emery, Andy Moor and this global support has not only lead to remix and collaboration requests from many of her peers but has also lent a lot of support and extra respect to her own solo productions. She has gradually built up a loyal, hardcore fan base whilst keeping the integrity within the “Coldharbour” sound that she has become know for. Progressive Trance with balls!! Is how she likes to put it.

Grube & Hovsepian – As the saying goes, two heads are better than one – a maxim keenly demonstrated by the success of Tim Grube & Mike Hovsepian’s studio & spinning union. Grube & Hovsepian came into existence in 2008 when – having heard Markus Schulz dropping his tracks on his Global DJ Broadcast show – Tim made contact with Mike. As A&R for Schulz’s record label, Tim had locked onto the intrinsic Coldharbour themes in Mike’s productions. A like-mind recognized, he proposed a new partnership for the pair. It’s one that has subsequently seen them bring their productions – ‘City of Angels’ and ‘Venom’ among them- to the sound-systems of some of the world’s most celebrated clubs and events. These have included stateside home-runs at LA’s Avalon, Miami’s Mansion, and main-stage wowing performances at European arena events, including the mighty Transmission.

Mike EFEX – For 16 years, California resident Mike EFEX has grown to become a household name in the EDM industry worldwide. His talents as a producer & DJ have got him support from today’s biggest names including Markus Schulz, Matt Darey, Tiesto, Ferry Corsten, Rank 1, Paul Oakenfold Marcus Schossow, Mike Koglin, Arnej, Max Graham and many more.  Mike finished off 2011 with his explosive remix of “Territory” Grube & Hovespian Vs. Klauss Goulart which released on Arnej Music. This track was featured on Beatport Top 100 Trance and continues to shake up dance floors. Mike’s past originals and remixes can be found on labels such as Armada Music, Infrasonic Music, Neuroscience Recordings, Arnej Music, Ultra Records, Perfecto Records, Lange Recordings, Spundae Music, among others. His unique sound continues to capture new audiences around the world. Just Google Mike EFEX and you will see.

Lange – Lange is recognized as one of the most influential dance artists of the past decade; a DJ who has remained at the forefront of the scene throughout his career and a producer that continues to push all boundaries. After an exhausting list of achievements, counting among them 20 UK top 40s, featuring on a film soundtrack, and remixing mainstream artists such as The Pet Shop Boys and Faithless, Lange remains one of the world’s leading EDM producers. Alongside Lange’s exceptional and successful studio work, he is a prolific international DJ, making appearances for some of the best club brands in the world including Insomniac, Cream, Godskitchen and Gatecrasher as well as performing for prestigious events such as such as Tomorrowland, EDC, Global Gathering, Sziget, Balaton, and ASOT and marked by his sustained appearance in the influential Top 100 DJ Poll for 8 years and rising to no. 6 in the well supported Tranceaddict Top 250 Poll. His eclectic, stimulating and driving sets pull influences from across the dance music spectrum from trance, progressive, techno and electro; Lange is an artist that has continued to reinvent himself to take on the evolving dance scene and show any aspiring new comer how to be an industry leader through pure talent alone.