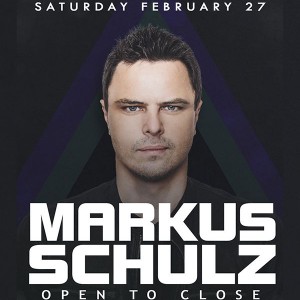 Markus Schulz – Over the last 10 years Markus Schulz has crafted the individual musical identities of progressive, trance & house into his own unique hybrid sound. The combined influence of his headlining DJ sets; Armada and Coldharbour label releases and highly prominent Global DJ Broadcast radio show have seen him at the forefront of the US EDM revolution. This success has been reflected in weekly sets spun in front tens of thousands, a GDJB listenership up in the millions and critically acclaimed albums, including ‘Do You Dream?’ and most recently ‘Scream’. Through his natural audience interaction, flawless, intuitive harmonic mixing, unparalleled tune selection and now famous open-till-close sets, he has wowed crowds in every major metropolis. Schulz’s DJ career has largely tracked that of his productions. In the early noughties he was among the first producers to zero in on the hinterland between trance & progressive. His career received a significant boost when, in 2004, he signed with the David Lewis Productions DJ agency (also home to Armin van Buuren). Now a regular fixture at the world’s biggest & most celebrated clubs, arenas and festivals, he lays down his inimitable trance-progressive vision on a weekly basis. In Europe, he’s smashed Tomorrowland, Transmission, Nature One, Dance Valley, Electronic Family, Sunrise and; worked tent-pegs loose at Creamfields; gridlocked Global Gatherings and played open-till-close sets at Space, Miami, Avalon, LA and both Amnesia and Privilege in Ibiza. Stateside the colossal EDC, Nocturnal, and Ultra Festivals have all felt Schulz pressure and yet further afield still he’s engineered floor uproar across South East Asia and Australia.