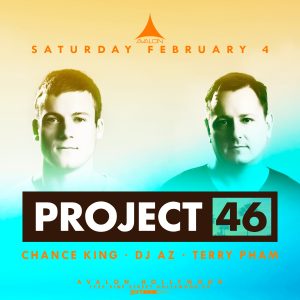 Project 46 – Project 46 made an undeniable impact on the progressive house scene this year, on a meteoric rise that started when their breakthrough Monstercat release Reasons featuring vocals by Andrew Allen went straight past Tiesto to the #1 overall spot on Beatport. Living at opposite ends of the country has not slowed down the steady flow of productions from the Project 46 studios, as Ryan and Thomas find time to post new tracks on their Soundcloud page at least weekly. Their refreshing mixes of originals, remixes, bootlegs, and mashups have kept fans engaged and drawn massive support from followers across the globe. Fast forward a few months, and releases on SPINNIN and Manufactured Music combined with their solid studio output and touring schedule earned Project 46 a well deserved placement on the Top 100 DJs list, squeezing in at #100, joining Richie Hawtin and Deadmau5 as the only Canadians to make this year’s poll.

Chance King – Raised on Oahu’s famed North Shore in Hawaii, Chance King’s roots are deep in country living. He began Dirty Feet Crew (DFC) clothing company representing the “no shoes, no shirt, no problem” attitude prevalent in the islands. Persistent with his no-holds-barred upbringing, Chance had already been well connected to the island EDM scene, Playing the biggest festivals in hawaii with Wonderland Entertainment Group, Chance King has since shared the stage with artists such as Ghastly, Jauz, Yellow Claw, Marshmello, Aryay and Dr. Fresch, and has been featured on Hawaii radio stations 102.7 Da Bomb and KTUH 90.3FM, with appearances at internationally renowned clubs like Exchange LA, Sutra OC, Avalon Hollywood and Asylum Confidential. Also an ICON Collective graduate, combining the spirit of the ocean with the freedom of sound to build a repertoire of music to be heard worldwide.