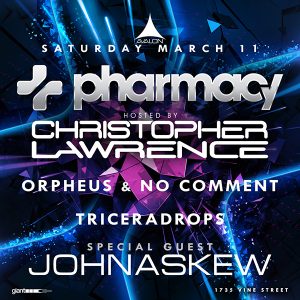 Christopher Lawrence – A dance music legend with a career spanning twenty years, Pharmacy Music founder Christopher Lawrence is one of the world’s most respected DJs and producers. His tough live sets, innovative productions, and unwavering commitment to underground trance has earned him the respect of industry and fans alike. An IDMA’s Best American DJ winner, he has been described by DJ Mag as “One of America’s most influential DJs”.

Orpheus – The name Orpheus derives from Greek mythology – when he was called by Pindar, the ancient Greek poet who also known as the father of songs. Myth says that when Orpheus played his instrument, all the trees, and stones were listening, the rivers divareted their course, and the forest animals gone silent. Behind the Orpheus project stands Yaniv Gabay from Israel – producing trance since 2007, Yaniv begun his musical career at the early age of 12, playing on different instruments such as piano, guitar, and drums. Orpheus main goal is to bring unique style of trance, which characterized by powerful music with a touch of classical instruments, not compromising in the quality and purity of the sound. In 2009 Orpheus won in an international contest of Phonokol Ltd. In 2010 he won in an international contest of FM Music. His tracks were released in digital stores. In 2011 “Tanuja dancing” and “Losing control” (Remix of X-noise) were released in Astrix’s “Trance for nations” 5 and 7. With over 30 releases on varoius compilations and countless collaborations with renowed artists such as: Christopher Lawrence, Infected Mushroom, Astrix, Azax Syndrom, Berg, X-Noize, Vibe Tribe, Krunch, Osher, Royal Flush (aka Bizzare Contact & Mystical Complex), Psycraft, Onyx, Shakta, and Point (aka The Big Brother).
The journey has just begun.

No Comment – No Comment is the fresh new project by : Omer Kadosh(Rizo) and Yaniv Gabay. Both have been in the scene for over a decade, Rizo as Krunch and Dark Soho,Yaniv as Orpheus. After years of experience in music production, DJing and composing it was natural for them to combine forces and come up with some new ideas.