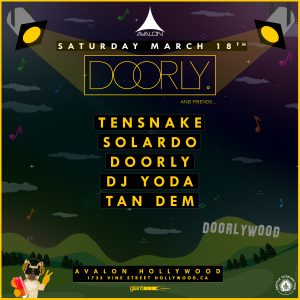 Tensnake – Born in Hamburg in 1975, Marco grew up listening to disco, soul, boogie, funk and 80s pop. As he grew older he went through a brief Mod phase before finding and embracing more dancefloor-inspired influences from Larry Levan to Junior Boys Own, Romanthony to Masters of Work. After starting the Mirau Musik label with friends in 2005, Marco released his first record “Around The House.” He made his commercial recording debut on the Mirau Musik label with his Restless EP in 2006, which he followed up with I Say Mista in 2007. In addition, he released EPs on the labels Players Paradise (Dust, 2007), Radius Records (Fried Egg, 2007), and Endless Flight (Keep Believin’, 2008). In 2007 he also founded the label Glossy Edits, which quickly gained a great reputation amongst music collectors.Tensnake’s first taste of critical acclaim came with the release of his “In the End (I Want You to Cry)” EP on the label Running Back in 2009. The EP was voted #1 on djhistory.com’s end-of-the-year list, and was the driving force behind Tensnake’s breakthrough success.Launching even further onto the scene with his track ‘Coma Cat’ in 2010, Tensnake smashed dance floors worldwide and earned himself a name as a game-changing dance pioneer. Called “highly precise modern disco” by the New York Times and “infectious” by Idolator, Spin said that “Tensnake helped pave the way for the current deep- house revival.” In 2013, Tensnake was asked to deliver an Essential Mix by BBC Radio1’s Pete Tong, thus further cementing his status within the scene. Released in 2014, his debut album ‘Glow’ represented a milestone in a career which had already traversed the world’s greatest dance floors, and which earned Tensnake his towering reputation as one of house and disco’s leading producers. This debut album features an impressive range of collaborators, including the almighty Nile Rodgers, three time Grammy-winning Stuart Price (AKA Jacques Lu Cont), Jamie Lidell, MNEK, Fiora, and more. ‘Love Sublime,’ the album’s 3rd single, is a delicious slice of disco pop adorned with the unmistakable guitar groove of Nile Rodgers and the beguiling vocals of Fiora. It follows the two previously released album tracks, ‘58 BPM,’ a lush, down-tempo disco jam, and sumptuous house cut and Beatport Top-5 hit ‘See Right Through’ (both featuring Fiora.) Since Glow’s release, Tensnake has gone on to launch his latest artist label, True Romance, where he has released tracks from forward thinking artists such as Andre Hommen, Prison Grande, Charlie Sputnik, Sunrise Highway, Magic Touch, Larse, and more. He also continues to release successful EP’s of his own work on True Romance, including 2015’s Keep On Talking / The Walk EP, and 2016’s Desire and Freundchen EP’s. Tensnake’s repertoire of remix work has also grown substantially over the years, with official remixes commissioned from him by Junior Boys, The Faint, Aloe Blacc, Azari & III, Scissor Sisters, Goldfrapp, Friendly Fires, Little Dragon, Lana Del Rey, Pet Shop Boys, London Grammar, and more.

Solardo – House and techno artists Solardo are made up of UK based producers Mark Richards(MRK1) and James Eliot. Mad tech, Viva, Of Unsound Mind, Roush, Kaluki, Lost, Mta, Snatch, Clarisse! Having previously had a long and deep history in other music genres, Solardo, are now one of the most hotly tipped DJ/production duos in the house and techno scene. Solardo are carving their own sound in the house and techno market. Their productions have their own unique warm, and high energy sound which have received great support from the likes of Pete Tong, Annie Mac, Jamie Jones, Richy Ahmed, Joseph Capriati, Skream, Paco Osuna, B.traits, Monki, Hot since82, Eats Everything, Green Velvet, Dennis ferrer, Adam Beyer, Matthias Tanzmann, Davide Squillace, Steve Lawler, Patrick Topping, Russ Yallop, Claude von stroke, Route 94, Groove Armarda, Denney, Loco Dice, Hector Couto, Detlef, Bontan, Sidney Charles, Sante, Mark Jenkyns, Booka Shade, Leftwing and Kody and Jackmaster to name just a few. Solardo latest single ‘New Jam’ recently released via Viva, went on to become an Ibiza anthem over the summer. Recently released on the Detlef and Denny’s compiled “Viva Warriors Season 4”, the track received support from pretty much everyone in the house and techno scene. Solardo have just remixed Nathan Barato’s new single ‘When i do(my thang)feat kid enigma’ which is forthcoming on ‘Kaluki Musik’ which has recently been premiered on Skream’s BBC Radio 1 show. They also have music coming on Skream’s label ‘Of Unsound Mind’, Mark Jenkyns and Max Chapman’s label ‘Resonance, Riva Starrs label Snatch, Hector Coutos’s label Roush, Leftwing and Kody’s Lost Records, Chase and status’s MTA and underground audio aswell as music on their own label ‘Sola’. The first single they released named ‘Planet Moog’ via their ‘Sola’ imprint, pricked up the ears of Boiler Room who premiered it on their channel and described them as “Big ambition at work”. With lots coming from Solardo in the near future, this duo is without doubt the ones to watch in the coming months.

Doorly – It’s been just a few years since Pete Tong touted Doorly as a future star, but not even the Radio 1 icon could have predicted just how rapid his ascent would be. As of 2016, he can already add two Essential Mixes, multiple Beatport and Traxsource No.1s, production for Usher and Nicki Minaj, sharing the stage with The Prodigy, acclaimed releases on Cajual, Dirtybird and Hot Creations and studio collaborations with Cajmere and Grandmaster Flash to his ever-growing list of achievements. And he’s only just getting started. Doorly cut his teeth in his native Huddersfield, running his own party and booking the likes Armand Van Helden, Fatboy Slim, Erol Alkan, Annie Mac, 2 Many DJs and eventually Pete Tong, who was so impressed by his ability behind the decks that he offered him a Live Radio 1 Essential Mix direct from the club. Following this seal of approval, Doorly’s gig schedule took on a life of its own, with DJing in Time Square New York and touring regularly alongside Fatboy Slim just some of the highlights. At the same time as touring, Doorly was working hard honing his craft in the studio, establishing himself as a versatile, in-demand producer. Remix work for an enviable list of A-list acts followed, with imaginative reworkings of tracks from Kanye West, The Prodigy, Dizzee Rascal and Basement Jaxx setting Doorly on a different creative level to many of his peers.