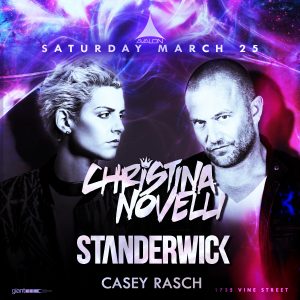 Christina Novelli – Christina Novelli was born in Southampton, England and is an up and coming name in the world of pop rock! As a child, all Christina wanted out of life was to become a singer, and she was driven by the music of Motown, Johnny Cash, Elvis, Tina Turner, Lauryn Hill and is currently influenced by Paramore, Pink, Biffy Clyro and Dashboard Confessional. For the past two years, she has been touring the UK extensively. Stripped down and acoustic or with a full-on band, she’s proved the power of her singing, her songwriting and her stage persona and built a very large, loyal and fanatical gay and straight following, gaining momentum with every show. She has amazed crowds all over the world with her powerful infectious voice and has an amazing ability to engage the crowd she is performing. She plays guitar but with a twist, she can play a right handed guitar, upside down. Christina has played countless venues in and around London (where she is based), including Barfly Camden, KoKo Camden and The Proud Galleries, to name a few. She has also sung at various venues in the USA-; Whiskey a go go (Hollywood) and The House of Blues (California), as well as these gigs she was asked to play at The Midlands Music Festival (supporting The Sugababes, Lemar, Blue and Atomic Kitten) and also Whitehaven Music Festival (supporting Belinda Carlile).

Standerwick – It has been quite the compelling story for this once described ‘enigmatic’ music producer and DJ from the United Kingdom, but there is nothing mysterious about the success STANDERWICK has achieved inside the world of Dance Music to date in such a short space of time, his decision to move from writing Rock Music to Electronic Dance Music was a decision well made. STANDERWICK has had a blistering track record in the last two years – 5 Beatport Trance No.1’s, 14 Top 5’s and 7 Top 10’s. He is also ranked as the 12th best-selling Trance producer of all time (Beatstats Jan17) which is remarkable in just over 3 years. His unique style of production has seen him remix for Armin van Buuren, Markus Schulz, John O’Callaghan amongst numerous others with his remix for Gareth Emery Ft. Wayward Daughter ‘Reckless’ being voted #2 in Armin van Buuren’s A State Of Trance radio show 2016 Track of the Year poll. 2016 was without doubt STANDERWICK’s most prolific years to date after performing at some of the world’s biggest festivals and events including: A State of Trance Toronto and Utrecht, EDC Las Vegas, UK and Orlando, Dreamstate Los Angeles, New York & San Bernardino, Tomorrowland Belgium and Cream Ibiza, plus club tours on every continent on the planet. STANDERWICK 2017 has arrived with a bang with new single ‘Saving Light’ the collaboration with Gareth Emery and Haliene hitting #1 on the Beatport Main Dance Chart and has had wide spread acclaim already poised to be one of the biggest tracks of the year. The beginning of 2017 also saw STANDERWICK sign an exclusive recording deal with global giants Armada Music and the announcement of a new remix for Armin van Buuren’s latest release, as the first of an exciting 12 months release schedule. With some exciting new ideas and concepts both in the studio and on tour 2017 is shaping up as a defining year in STANDERWICK’s career so far.