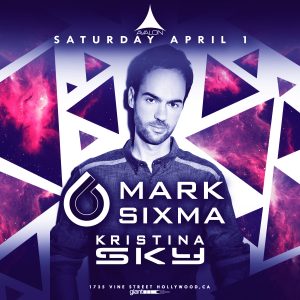 Mark Sixma – Mark Sixma inevitably caught the dance music bug growing up in now-famous Breda, the Dutch city that produced Tiësto, Hardwell, and more. After mastering the art of DJing in his teenage years, Mark decided to try his hand at making his own music to play live. One of his first releases, ‘Destination 6’, received ‘Tune of the Week’ status on Armin van Buuren’s radio show, A State Of Trance, and was supported by some of the biggest names on the planet. The next single led to Mark signing with Armada Music. Fade 2 Black was, once again, selected as Tune of the Week on ASOT, truly cementing Mark as one to watch within the world of trance. Armin van Buuren then selected Mark’s tracks for his annual, platinum-selling A State Of Trance compilation three years in a row. In addition to the compilations, Armin also featured one of Mark’s tunes on his Wii Game and gave him the opportunity to remix ‘Minack’, the massive collaboration with Ferry Corsten. Since then Mark has gone on to release on some of the biggest labels in dance music, including but not limited to: Armada, Revealed, and Blackhole Recordings. Also on his list of achievements is the mix compilation ‘Worldwide Trance Sounds Vol. 6’ on Armada Music. Mark Sixma has toured extensively, with big performances across the globe alongside top DJs like Armin van Buuren, Ferry Corsten, Gareth Emery, Judge Jules, Markus Schulz, Paul van Dyk, Sander van Doorn and W&W. Mark has performed at several festivals including Stereosonic, A State of Trance 550 & 650, Nature One (two times) as well as Electronic Family, Escapade Music Festival, and Ultra Music Festival Miami in 2015. He also played alongside Armin van Buuren for the official closing party of the legendary Guverment in Toronto. In 2013 Mark Sixma made his debut on W&W’s fast-rising label ‘Mainstage Music’ with his epic smash ‘Requiem’. This fought off competition to hit the Beatport Trance Chart at #1, beating the likes of world number one DJ and producer Armin van Buuren, whilst also holding the #1 slot on major digital download sites Audiojelly and Trackitdown, achieving a unique hat-trick of chart-topping positions! His tune ‘Requiem’ was the most played trance track of 2013, and he had scored six top 10 Beatport records for his original tracks ‘Character’, ‘Refused’, and ‘The Saga’, and his remixes of Orjan Nilsen (‘Mafioso’), Cosmic Gate (‘Crushed’), and Jorn van Deynhoven (‘New Horizon’) up to this point. 2014 was a breakout year for Sixma, who released an updated version of the iconic ‘Adagio For Strings’, ‘Shadow’ (W&W Edit), remixed Cosmic Gate and Armin van Buuren (‘Save My Night’), and released on both Armada Music and Revealed Recordings. While ‘Adagio’ held the #1 spot on Beatport, Sixma got to kick himself out of the charts with his next record, as his remix of ‘Falling Back’ supplanted ‘Adagio’ to claim the #1 position in the charts from himself — a feat very few have accomplished. Mark Sixma’s first North American Tour took place in 2015, following his top-level releases and remixes from the previous year. After seeing heavy support from Armin van Buuren, the two finally collaborated on ‘Panta Rhei’, a major accomplishment for Sixma that would lock in his place in the the dance music elite. As Mark Sixma shifts gears, he heads into the future with more ammunition than ever, and he’s poised to dominate the industry that he’s shook since the very beginning of his career.

Kristina Sky – With records out on Armin Van Buuren’s Armada, Paul Van Dyk’s Vandit and U.S. mega-label Ultra, while holding a coveted residency at the world-famous Avalon Hollywood, it’s easy to see why Kristina Sky is one of America’s brightest shining Electronic Dance Music stars. Born and raised in Los Angeles, she’s been DJing to thousands of passionate dance music fans since 2002, coast-to-coast in the U.S. and around the world—from China to the Philippines, Ecuador to Guatemala and Canada to Costa Rica. Handpicked to play Armin’s ASOT550 in the Netherlands, Insomniac’s Electric Daisy Carnival and North America’s biggest music festival, Coachella—sharing the stage with legendary acts like Madonna and Daft Punk—Kristina is undoubtedly one of America’s most beloved EDM ambassadors. Her live set recordings, guest mixes and popular radio show, TRANCELATE, generate tremendous support from her ever-growing fanbase—broadcasting worldwide via satellite, FM and the internet. It’s really no wonder that Kristina’s uber-dedicated fans voted her #39 in America’s Best DJ Poll 2013 and have kept her in the top ranks of the highly regarded Tranceaddict Top 250 DJ Poll for six consecutive years (#74 in 2012), while VIBE Magazine named her one of 30 DJs to watch in 2014! Her DJ sets are unforgettable and energetic journeys through the best of dance music and her production sound ranges from warm and groovy progressive-house to emotional, melodic and uplifting trance. Playing alongside many of the world’s top DJs, while also gaining their support on her tracks, it’s only natural that she’s made quite a name for herself in the global dance scene. If you haven’t had a chance to experience one of Kristina’s live sets yet, anyone who has will tell you that you’re missing out. Her passion and love for the music is undeniable and her ultimate goal is clear—to move you on that dancefloor and leave you with a memorable soundtrack to nights you won’t forget.