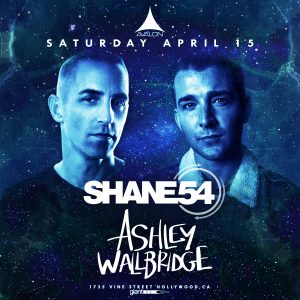 Shane 54 – Music enthusiasts globally have been on quite the journey with Hungarian born, Shane 54. As a well-accomplished producer, DJ and performer, this icon’s signature sound has fused with it elements of trance, progressive, and house. Whether it’s coming from the studio and to the masses via the decks, the sound of Shane54 has been awakened, and he is delivering his style of electronic music, in all its richness, to the masses. As a hugely successful Hungarian boy band member in his earlier days, Shane has embraced every sonic endeavor he has undertaken to its fullest – breaking recording records in Hungary, winning awards (including the German Bravo Otto awards), and enthralling the masses on a musical journey. Making the move into Electronic music, Shane 54 has been a standout performer as one half of DJ Mag ranked, Myon & Shane 54 where he also was the voice of the world-renowned radio show, International Departures, hitting over 300 episodes and channeling often into the #1 spot on iTunes podcast ranks. Having reaching #1 on the Billboard Dance Club Chart and remixing the likes of Lana Del Rey, Above & Beyond, Tiesto & Armin Van Buuren, the duo also dominated stages across the world – leaving an quintessential footprint at EDC Las Vegas, Ultra Miami, Tomorrowland, Electric Zoo New York and opening the renowned ASOT 400 to name a few.

Ashley Wallbridge – Securing a charging position as one of electronic music’s esteemed DJ’s and producers, Ashley Wallbridge is riding his own fresh wave in and out of the studio. From the United Kingdom’s Stoke On Trent, he has amplified a career from the undying passion of the crowds in front of him, the enthusiasts tuning in and the fellow talent that surrounds him. The studio is a content haven of musical liberty for Ashley; reeling in the remix requests from Avicii, Havana Brown, Krewella, Gareth Emery, Armin Van Buuren & more, while trapping his own originals at their finest. Releasing on Avicii’s label Le7els, the electronic industry saw the surge of Crush highlight the Beatport Progressive Chart top ten mid year of 2014, with his strong follow up called Africa supported by BBC Radio 1’s Pete Tong and Danny Howard, Avicii himself, David Guetta, Gareth Emery and W&W to name just a few. His debut album in 2012 ‘’The Inner Me’’ reached #5 on the iTunes USA charts, #9 in Canada and #12 for the UK. Migrating the tunes to the crowds, this electronic exemplar clutches music in its prime, showcasing a commode of musical wealth from Europe to the USA. Featuring at Los Angeles’ Exchange the new Omnia in San Diego, Ministry of Sound in London Privilege Ibiza & a residency at the famous Las Vegas hot spot ‘Marquee’., the resume spills over. Taking it up a score at Creamfields Australia, Global Gathering in the UK and Sunset Music, the festival crowds aren’t ever neglected with the Wallbridge brand igniting demand everywhere. Its in Brazil, where he really stood solid playing to thousands on Armin Van Buuren’s tour, a year prior on a three show ASOT run, while alongside Swedish gun Alesso at Israel’s Blue for Dance was a monumental event. Now into 2016 Ash has now signed a new deal with the power house label “Armada Music’’ with stacks of new music ready to launch while continuing to push musical boundaries, Ashley Wallbridge will continue to reign ahead of the game, with highly anticipated releases on one of the world’s hottest labels while the high end shows are at their peak.