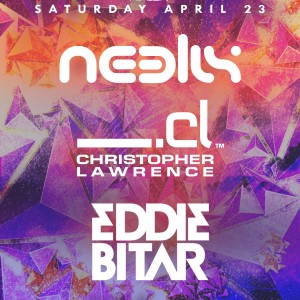 Neelix – There’s only one obvious thing in the sound of Neelix: Relentless forward boost. Exactly how this boost is generated is not obvious at all – which makes it catchy in the most subliminal way possible. The German artist playfully incorporates elements of Progressive Trance, Progressive House and Electro. However, the actual magic of Neelix happens somewhere inbetween those genres. For 10 years already this unique formula made him a crowd-pleaser at a great variety of dance events on all 5 continents, including monumental festivals like Electric Daisy Carnival, Tomorrowland or Boom. It’s 2005 when Neelix stirs a revolution. His album ‘No Way To Leave’ fulfills all the expectations of the dance floor – but it does so in the most unexpected way. Within no time, party goers refer to his highly dynamic hybrid style simply as ‘Neelix sound’. It’s the beginning of a stellar career that keeps building and building – just like a typical Neelix track itself. During the last decade, the music of Neelix has inspired a whole generation of producers, it can be found in the collections of countless DJ, in film productions, and in the catalogues of prestigious labels like for instance SpinTwist Records or Paul Oakenfold’s legendary Perfecto imprint.

Christopher Lawrence – Winner of “Best American DJ” at the IDMA’s, Christopher Lawrence is recognized as one of the world’s top DJs and producers. A dance music legend, he has been described as “One of America’s most influential DJs” by DJ Mag and “A trailblazer” by SPIN. With two decades behind the decks, Christopher is one of the most credible names in dance music whose outspoken support of the underground has earned him the respect of industry and fans alike. Always pushing boundaries, Christopher’s tough, tech and psy infused trance sets are a favorite on dance floors at the darkest downtown afterhours to the world’s biggest festivals. Christopher has racked up numerous awards and accolades over the course of his career taking out both DJ Times “America’s Best DJ” award and IDMA’s “Best American DJ”. He has graced the covers of countless magazines, newspapers and music websites worldwide. With a club touring schedule circling the globe, Christopher delivers his unique brand of high energy mayhem to dance floors from Avalon Hollywood and Ministry of Sound to Home Sydney. He has hosted his own arena at Dance Valley, and played every major festival including Ultra, Coachella, EDC, Creamfields and Global Gathering.