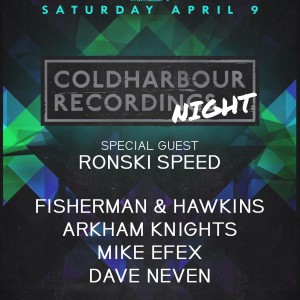 Ronski Speed – German dj & producer well known for tracks like “Lasting Light” with EMMA HEWITT, “Rise Again” with LUCY SAUNDERS as well all time classics like “The Space We Are”, “E.O.S. Satallite” with Above & Beyonds – Oceanlab ft. Justine Suissa, “All The Way” with Aruna, “Deep Devine” & “A Sign” with Ana Criado, “Incognition” & “Soulseeker” with Stoneface & Terminal and “I’m Alone” as Sun Decade. Remixer for Bryan Adams, Above & Beyond, Armin Van Buuren, Markus Schulz, Andy Moor, Mori Kante, ATB & Heather Nova. Played in 80 countires and all the continets around the world.

Fisherman & Hawkins – Fisherman & Hawkins (Isaac Vissers and Rob Koopmans) have already been in the ‘E.D.M’ (Electronic Dance Music) scene for a number of years. Late in 2011 Fisherman & Hawkins was born, they realised there was a great level of understanding between them combined with complementary production qualities, making it the natural step to form the now fast-rising duo. The boys debut original titled ‘Perlas’ saw them collaborate with highly respected Mark Sixma, receiving support from across the globe with its release on Armada’s sub-label ‘Captivating Sounds’. This collaboration received airplay on world renowned shows such as Armin van Buuren’s ‘ASOT’ and Sean Tyas’ ‘Tytanium Sessions’ on from this the boys locked themselves away in their studio. Another rip-roaring track ‘Nightshift’ was the end result. If they needed affirmation of Nightshift’s impact, they received it in the form of Markus Schulz immediately signing it to his imprint ‘Coldharbour Recordings’. The buzz surrounding this release was immense after Markus had aired it several times his radio show ‘Global DJ Broadcast’. The demand for a follow-up was instant, as dust begun to settle from the previous release, this dynamic Dutch duo delivered ‘Apache’. It was first received by the crowds of infamous ‘Scream’ release parties in Miami and New York, as well as Toronto’s ‘Labour of Love’, the response was resounding and can only be described as a ‘game-changer’.

Arkham Knights – Arkham Knights (Stuart & Ben Turner) brotherly duo from Leeds in the United Kingdom have made there mark on the scene with there insane Techno fused Trance style, focusing on driving percussion, rumbling bass-lines & infectious melodies. There music has worked it’s way into all the big players live sets, radio shows & some of the most iconic compilations. Their track “Blackgate” was a real hit with many dj’s and clubbers, more notably the legendary Markus Schulz gaining countless support in his live sets and his Global Dj Broadcast Radio Show. The AK duo followed up with their biggest hit to date, the MASSIVE “Knightfall” which was snapped up by their dream label, the world renowned Coldharbour Recordings. The track gained huge support from label boss Markus Schulz & has become a staple in his live sets & GDJB Radio Shows. The success didn’t stop there, it played a starring roll in one of the most iconic Trance series on the scene… the legendary Ministry Of Sound Trance Nation & also landing the duo their first top 10 in the Beatport Trance Chart with a respectable #4. With more exciting releases & news on the way, Arkham Knights are definitely one’s to watch in 2016… Stay Tuned!