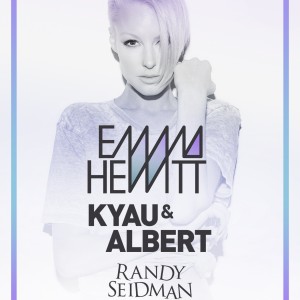 Emma Hewitt –  Few voices are as instantly recognizable as that of Australian born songstress, Emma Hewitt. Hewitt’s haunting melodies, yearning lyrics and distinctive style have earned her a legion of passionate fans around the world as she continues to write and release music with some of the world’s most respected names in electronic dance music.

Kyau & Albert – Ralph Kyau and Steven Moebius Albert are known to the EDM world as Kyau & Albert. The two Germans have produced such massive club hits like “A Night Like This”, “Another Time”, “Velvet Morning”, “Kiksu”, “Megashira”, “Are You Fine?” and so much more. One little known K&A fact: all male vocals come from Steven Moebius Albert himself! In 1997 Kyau & Albert founded their record label Euphonic, which is one of the top brands today. Their successful debut artist album “Here We Are Now” was released on 3 continents. They remixed some of the biggest names in club land like Faithless ft. Dido, Armin van Buuren, Kosheen and so much more.

Randy Seidman – Randy Seidman is one of the hardest working electronic music artists in Los Angeles. His dedication to quality has created a demand for Randy that he is humbled to meet. Randy’s versatility has enabled him to share the stage with such well-known DJs as Kaskade, Ferry Corsten, Cosmic Gate, Benny Benassi, Andy Moor, Gabriel & Dresden, Erick Morillo, Orbital, Christopher Lawrence, Astrix, Morgan Page, M.A.N.D.Y, and many others. Randy’s sets are comprised mainly of his own edits, creating a unique flow & atmosphere that has caught the ears of many. Since 2007, Randy has been the top support choice of trance megastars, Infected Mushroom, playing over 300 shows with them around the world (from Ecuador to India, Mexico to Russia, Canada to Ibiza, New York to Madrid, and countless places in between). They named Randy “Breakthrough DJ/Producer of the Year” in the prestigious DJ Mag Top 100 poll.