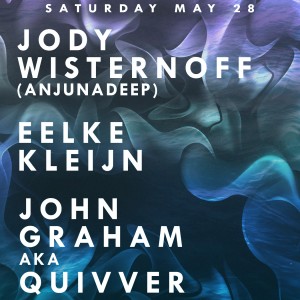 Jody Wisternoff – Jody’s incomparable ability to succeed with production and DJing has seen him climb to the highest heights of Beatport (and we’re talking THE overall, not genre chart here) and iTunes; remix Above & Beyond, Robert Babicz and more; tour the UK alongside 808 State legend Graham Massey; maintain a monthly show ‘Intensified ’ on Frisky radio, now in it’s eighth(!) year; take on an A&R development role for Anjunadeep signing acts such as Lane8 and Lancelot and, as if all of that weren’t enough, release his own solo album, ‘Trails We Blaze’. “It’s probably fitting to end this biog as I began,” concludes Jody, “I really am busier now than ever, which is a blessing. Whether I’m in the studio, playing to 5 thousand alongside A&B at the Ally Pally or touring the world, I’m still as excited by what I do now as I was when I began. The music, style and opportunities may have evolved over the years, but my passion remains the same. No time for pipe and slippers yet!

Eelke Kleijn – Eelke Kleijn is a rare talent. With work stretching across movie trailer scores, deep live shows and incredibly well formed production, he crosses a boundary from electronic producer and in to a true modern day composer. With peers and tastemakers standing up for this unmistakable imagination, the Rotterdam based music maker’s potential has no bounds. With 2 artist albums delivered, an array of originals and first class remixes what he has achieved thus far would be any DJ’s reverie. Sony to Toolroom, Ultra to EMI, Global Underground to Eskimo Recordings and Spinnin’ to Suara have seen the young Dutchman’s vision in productions become world heard. With each record distinct but all out floor fillers, they have been pumped out in his epic sets from Argentina to Netherlands and Australia to the UK.

Quivver – John Graham started his production career in the early 1990s, and has been a household name within the electronic music scene ever since. He is best known as Quivver, but has invented a host of other monikers, including Space Manoeuvres, Stoneproof, Skanna and Tilt, each representing a different shade of his eclectic production sound and each giving an idea of his true versatility. John has always gained consistent support for his many varied club releases from DJ giants and close friends such as Sasha, Tong, Oakenfold and Digweed, whilst also having his early Skanna efforts lapped up by drum & bass royalty including Fabio, Grooverider and Doc Scott. He is a multi talented DJ, producer and vocalist and after inking an early deal with A&M in the UK and being championed by Paul Oakenfold he joined Perfecto for several legendary releases and then onto Hooj Choons and Virgin’s “VC” imprint.