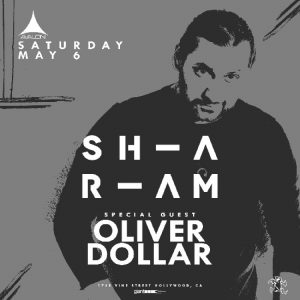 ShaRam – Sharam’s unique production style, along with a diverse list of accomplishments in the international charts and underground realms, has solidified him as a true non-conformist and innovator in dance music – both as a solo artist and as part of the legendary group Deep Dish. His eclectic DJ sets are a journey through sound, with razor-sharp focus to quality and obsessive attention to entertaining both purists and the unassuming. In Sharam’s mind, dance music is meant for everyone, and forward motion is only possible through cross-pollination of styles. Driving home this point is his list of his collaborators, which includes names like Chris Martin of Coldplay, Kid Cudi, Shakira, and P. Diddy, to name just a few. Sharam continues his trajectory as a masterfully bold and barrier-breaking DJ/producer with the recent release of his second artist album Retroactive; a retrospective look at his early influences as a DJ and music lover. Sharam fuses these influences with modern sounds to create what CRSSBEAT called “a thirteen track electronic masterpiece.” Featured artists like Giorgio Moroder, Daniel Bedingfield, and his signature collaborator Anousheh add fresh, head-turning dimensions to the project. When he’s not on the road or in the studio, Sharam is helming his record label Yoshitoshi, proving that after 20 years, the classic label is a taste making force for the ages.

Oliver Dollar – The past four years have seen Oliver Dollar’s name gradually build to a recognizable staple in house music. The Berlin born and based producer has gained acknowledgment through a series of solid releases on labels such as Play It Down, Rekids and Front Room Recordings. Remix credits can be found amongst the most famed independents; including Greco Roman, Rekids and Exploited as well as majors: Polydor and Ministry of Sound.