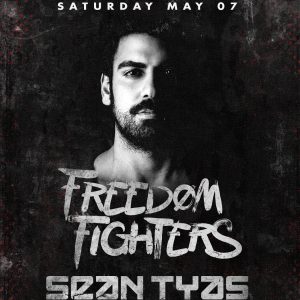 Freedom Fighters – Since 2006, Progressive Psytrance artist Freedom Fighters aka Shahaf (Sean) Efrat has been making dance floors tremble around the world. Since his humble beginnings in Tel Aviv, Israel, his name has gone from relative obscurity, to a massive threat on some of the worlds biggest festival stages. From Electric Daisy Carnival (United States) thru Hadra Festival (France), Maitreya Festival (Australia), Playground Festival (Brazil), The Gathering (Japan), Ommix’s Atmosphere Festival (Mexico), Groove Attack (Israel) to name a few. Not limiting himself to the confines of only psytrance, he draws influence from many genres which gives him a sound of his own.
Over the course of his career, he has had the opportunity to not only remix, but work side by side with some of the scene’s biggest names. The likes of Astrix, Simon Patterson, Ace Ventura and Skazi, only make up a portion of a massive list. With these collaborations and remixes has come some massive results including anthem “Marshmallows” with legendary Captain Hook, which has gained over 1.5 million views on Youtube till date. An idea can only be confined for so long, and with psytrance becoming a global revolution, it was only a matter of time before others started to take notice. Freedom Fighters is now one of the most sought after names in the traditional trance scene after a groundbreaking remix of Simon Patterson’s Beatport #1 “Dissolve”. His remix not only put his name in the sights of other trance artists, but also landed him a spotlight on the world’s largest electronic music radio show, Armin Van Buuren’s legendary “A State Of Trance”.

Sean Tyas – New York’s Sean Tyas burst onto the scene in 2006 after releasing his debut single “Lift” on Discover Records which immediately hit number 1 on Beatport. A great start and a sign of things to come as shortly after Sander van Doorn selected him as the winner of the “Punk’d” remix contest. Around the same time Mixmag & Beatport named Sean “Best New DJ” and “One To Watch” marking the beginning of a rapid rise to fame within the cooler ranks of the Trance fraternity. What followed was a consistent flow of number 1 hit records (including his unforgettable remix of Dash Berlin and Emma Hewitt’s “Waiting,” and his ground breaking single “Seven Weeks,” which spent an astounding 12 weeks at #1 on Beatport), an Essential Mix on the legendary BBC Radio 1, multiple compilations and a diary racked with sell out shows around the world.