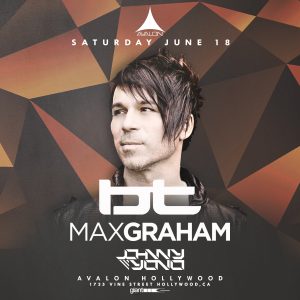 BT – Grammy-Nominated Film Composer and Recording Artist. Widely acknowledged as the inventor of the Stutter Edit and Godfather of Trance.

Max Graham – Born in London but raised in Canada, Max Graham has become a well-known name amongst international dance music fans across multiple genres. From his early days learning his craft at Atomic nightclub in Ottawa to his current tour diary that boasts over 75 countries, Max continues to enthrall fans both in and out of the booth. With hits like “Sun in the Winter,” “Nothing Else Matters,” and “The Evil ID,” his ambitious Open-to-Close DJ sets, and his renowned weekly show ‘Cycles Radio’, Max has shown time and time again that he knows how to make and play records that get the dance floor moving. In the late 90’s Max moved to Vancouver, where he evolved from the DJ booth to the recording studio. It was during this time that he produced his breakthrough track “Airtight,” which was nominated for a Juno Award in Canada, signed by Hope Recordings and caught the attention of DJ’s like Nick Warren and Paul Oakenfold.This marked the beginning of his respected career and cemented him as a mainstay in the industry, further solidified by his 2001 achievement of highest new entry in the DJ Mag poll at #23. After a short hiatus, Max returned with a new musical style and attitude towards the dance scene and in 2005 claimed his first commercial success when he broke the top 10 of the UK Top 40 charts with his highly-acclaimed bootleg of “Owner of a Lonely Heart.” Spawned beside this renewed sense of purpose was Max’s Cycles series. This fitting tag would be the benchmark of huge things to come for the esteemed producer and was swiftly launched into the world in 2008 with his Cycles 1 compilation.

Johnny Yono – An artist in every sense of the word, Johnny Yono brings all the passion and charisma that great musicians are made out of. Born and raised in the suburbs outside of Detroit, Michigan Johnny led a very active upbringing, dabbling in everything from ice hockey to playing drums in rock bands before pursuing an acting career. Following his high school years, he was drawn in to Motor City’s rave scene and through Detroit’s legendary underground dance culture, Johnny’s love for electronic music began to blossom. At the time however, acting was Johnny’s primary focus and in his early twenties, he set out to Los Angeles to pursue the grand dream of making it on the big screen. Johnny landed numerous roles in TV shows and independent films and managed to keep himself afloat but, continued to indulge in LA’s ever-growing electronic music industry. Having been inspired by Armin van Buuren, Paul van Dyk, Sasha & Digweed and many more, Johnny could no longer ignore his true calling. He assembled a small studio and began producing dance music. After experimenting with a variety of sounds, he finally planted himself in the realm of Trance and has remained ever since.