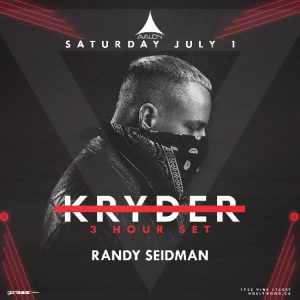 Kryder – 2016 sees Cartel kingpin and Sosumi boss, Kryder continue to build on an incredible 2015 campaign which saw an IDMA award for ‘De Puta Madre’, guest duties on the world renound ‘BBC Essential Mix’, an MTV compilation and key stage appearances at Tomorrowland (BEL), Creamfields (UK), Summerburst (SWE) and Nature One (DE) just to name a few. 2016 marks the game changing ‘Cartel’ record label in collaboration with Tom Staar and Spinnin Records, which saw a sold out launch party at WMC Miami and promises to lead the way for the summertime soundtrack. With remixes, collaborations and original material fueling the movement, Kryder will travel worldwide to the stages of Tomorrowland Brasil, Summer Story (ESP), as well as grace the shores of Ibiza, the USA and Japan to claim territory for ‘The Cartel’.

Randy Seidman – Randy Seidman is one of the hardest working electronic music artists in Los Angeles. His sets are woven together with original edits, creating a unique atmosphere that has caught the ears of many. Since 2007, Randy has been the top support choice of trance megastars, Infected Mushroom, playing over 450 shows with them around the world (from Ecuador to India, Mexico to Russia, Canada to Ibiza, New York to Madrid, and countless places in between). They named Randy “Breakthrough DJ/Producer of the Year” in the prestigious DJ Mag Top 100 poll. As one would expect, this exposure helped open many doors for Randy, including headlining shows at Ministry of Sound in Korea; Full Moon Festival in Koh Phangan (Thailand); Levels in Bangkok; Zouk in Kuala Lumpur (Malaysia); WhiteRoom in Sabah (Borneo); Pyramid & Velvet Hypnotized in Bali (Indonesia); El Siete in Quito (Ecuador); Rise Afterhours in Boston; Silk City in Philadelphia; and many other global destinations including Switzerland, Finland, Russia, and Mexico. Additionally, Randy has had the honor of playing some of the world’s best clubs and festivals including: Privilege (Ibiza), Kapital Festival (Ecuador), Caffeine Festival & Beta Nightclub (Denver), Guvernment (Toronto), Insomniac’s Nocturnal Festival (Austin), and three times at the Miami Winter Music Conference for Ultra Music Festival. All of this while holding a monthly residency at one of the world’s top nightclubs, Avalon in Hollywood.