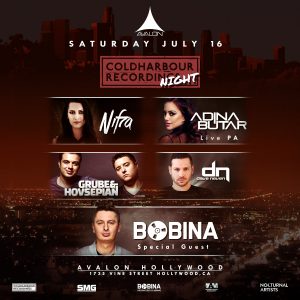 Nifra – Nifra has in a vast couple of years gone from being a local talent in central Europe to one of the most popular figures in the Markus Schulz “Coldharbour” entourage. With releases such as Dark Harbour, Ransvik and more she has taken the throne as the “Queen of Coldharbour”. She kicked of her DJ career back in 2008 and learnt her trade playing alongside and supporting such acts as Armin van Buuren and Tiesto in her home country of Slovakia which lead to her becoming quickly recognized as a massive potential future talent. We fast forward a few years to the present and now an accomplished producer and world renowned DJ in her own right, Nifra has now played countless shows around the world including Armin Van Buurens massive annual, “A State of Trance” party, Ultra Music Festival in Miami as well as multiple appearances all over Europe, North America and Asia.

Grube & Hovsepian – As the saying goes, two heads are better than one – a maxim keenly demonstrated by the success of Tim Grube & Mike Hovsepian’s studio & spinning union. Grube & Hovsepian came into existence in 2008 when – having heard Markus Schulz dropping his tracks on his Global DJ Broadcast show – Tim made contact with Mike. As A&R for Schulz’s record label, Tim had locked onto the intrinsic Coldharbour themes in Mike’s productions. A like-mind recognized, he proposed a new partnership for the pair. It’s one that has subsequently seen them bring their productions – ‘City of Angels’ and ‘Venom’ among them- to the sound-systems of some of the world’s most celebrated clubs and events. These have included stateside home-runs at LA’s Avalon, Miami’s Mansion, and main-stage wowing performances at European arena events, including the mighty Transmission. In the studio they’ve carved just as quick a mark on electronic dance music’s landscape. Building up an impressive disc & remixography, the duo have served up a proverbial sound-storm of tracks for many respected labels. Among them have been Armada Music, Audio Cargo, Club Elite, High Contrast, and (naturally enough) Coldharbour, who’ve shared the spoils of multifaceted audio like ‘City of Angels’, ‘Venom’, ‘Memory Lane’, ‘Invisible’, ‘Conviction’, and ‘Pressure’. Demonstrating stylistic range well beyond their years, together they’ve become as adept at serving markets with rapaciously uplifting trance storms as they have cooler-minded, more progressively orientated audio. Reflecting G&H’s impact, the music press have been quick to praise their releases. Of ‘City of Angels’, LA’s EDM Magazine said it “peaks with knock-you-off-your-feet-like impact” while the UK’s DJ Mag said that ‘Venom’ “could very well be Grube & Hovsepian’s coming-of-age track”. Their latest single ‘Memory Lane’ again highlights the pair’s impressive flexibility. With its more mainline, radio-conscious sound, the track became one of the first releases on the Schulz Music Group’s Audio Cargo imprint.