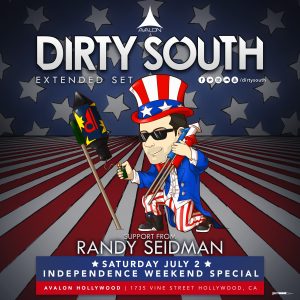 Dirty South – Dirty South, aka Dragan Roganovic, the world renowned DJ, two- time Grammy nominated producer and global festival headliner, is set to challenge every conventional mold of a musical release with his newest album and short-film project, entitled ‘With You.’ A full-sensory experience, ‘With You’ shatters the model of modern-day music with its genre-bending collaborations and resplendent imagery. There are no limits for the Serbian pioneer as he redefines the notion of what it means to be a music producer. See the album. Hear the movie. What began as the writings of a new, alternatively-driven album resulted in more than just a series of perfectly-strewn melodies; a hidden narrative lived between the lines of each individual track, and Dirty South was set to tell it. Enter ‘With You’, the identically named short film project written, directed and produced by Dirty South himself. Yet again challenging any notion of conventionality, the album serves as more than just a soundtrack to the film: it is the very backbone of all that is ‘With You’. Shot using the same revolutionary filming equipment as ‘300’ and ‘Transformers,’ ‘With You’ breathes new life to its dark forests, secluded lakes, and echoing tunnel scenes. Signed to global label Astralwerks in July 2014, Dirty South has collaborated with world-renowned producers, including Axwell who he also shared the studio with in creating their Grammy nominated remix of Temper Trap’s ‘Sweet Disposition’. Dirty South’s productions have earned him several awards including two Grammy nominations, two ARIA (Australia) nominations, a winning vote for ‘’Most Popular Producer Nationally’’ in the 2007 InTheMix 50 DJ Poll, and most recently an ‘’Essential New Tune’’ (Unbreakable, July 2014) award by the legendary Pete Tong.

Ryan Seidman – Randy Seidman is one of the hardest working electronic music artists in Los Angeles. His dedication to quality has created a demand for Randy that he is humbled to meet. Randy’s versatility has enabled him to share the stage with such well-known DJs as Kaskade, Ferry Corsten, Cosmic Gate, Benny Benassi, Andy Moor, Gabriel & Dresden, Erick Morillo, Orbital, Christopher Lawrence, Astrix, Morgan Page, M.A.N.D.Y, and many others. Randy’s sets are comprised mainly of his own edits, creating a unique flow & atmosphere that has caught the ears of many. Since 2007, Randy has been the top support choice of trance megastars, Infected Mushroom, playing over 300 shows with them around the world (from Ecuador to India, Mexico to Russia, Canada to Ibiza, New York to Madrid, and countless places in between). They named Randy “Breakthrough DJ/Producer of the Year” in the prestigious DJ Mag Top 100 poll. As one would expect, this exposure helped open many doors for Randy, including headlining shows at Ministry of Sound in Korea; Full Moon Festival in Koh Phangan (Thailand); Levels in Bangkok; Zouk & Sultan in Kuala Lumpur (Malaysia); WhiteRoom in Sabah (Borneo); Pyramid & Velvet Hypnotized in Bali (Indonesia); El Siete in Quito (Ecuador); Rise Afterhours in Boston; Silk City in Philadelphia; as well as many other global destinations including Switzerland, Russia, and Mexico.