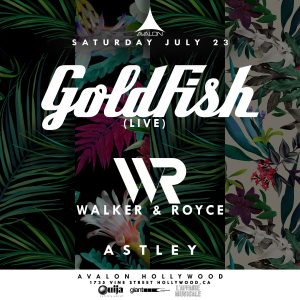 Goldfish – The secret is officially out. An electronic duo from the Southern-most tip of Africa have gone from one of Dance Music’s best kept secrets to an act tipped by industry tastemakers as the band to watch this year. Their genre-defying mix of live instruments, House beats and searing live performances has seen Goldfish go from impromtu jams at a tiny beach club in Cape Town to headlining Amsterdam’s Olympic Stadium, cracking a top 10 on the US iTunes Dance chart, a residency at Pacha Ibiza with David Guetta and DJ’s like Fedde le Grand knocking at their door to do remix their tracks. It’s almost hard to believe that not very long ago they were just Dom and Dave, two music students who lived a relatively chilled life of surfing and playing music in their home town Cape Town. All that really did change when they decided to record an album. Not having a record deal or much money, they simply locked themselves in a bedroom…with a double bass, a saxophone and a couple of synths, recording their debut Caught In The Loop on their own. A charming dance record that received massive support from the international dance music scene, desperate for something fresh and new. Pete Tong even called it his Ibiza Poolside Album of the Summer. The two guys quickly found themselves maintaining gruelling international tour schedule that saw them play sold-out shows from Amsterdam to Miami, from the Sydney Opera House to Sao Paulo, in-between still finding time to mix the covermount CD for DJ mag international, garnering a record-breaking 8 SAMA nominations, numerous number ones radio at home, as well as performances at Glastonbury, Sensation White, Ultra Festival Miami, 46664 and Get Loaded in the Park amongst others.

Walker & Royce – Walker & Royce have been producing their emotive, subdued and groove-heavy deep house for a while — but almost from the start, they were touted as future stars. Now it’s official, thanks to a certain UK tastemaker— not to mention a string of stellar productions and remixes.” -Bruce Tantum: Editor XLR8R “Walker & Royce” started when Sam and Gavin, having known each other in and out of the dance scene for years, finally began working together in 2011. As things usually go, it was a bit of luck that got them off the ground: Crosstown Rebels boss Damian Lazarus noticed one of their very first releases, a remix of SAARID’s “Future Lately”, on Nervous Records. The result was the Crosstown Rebels EP “You’re Not Welcome” and with that, Walker & Royce was launched into the dance music spotlight. Around the same time, Walker & Royce released a track on OFF Recordings that went on to become a house anthem: “Connected”. The song became a mainstay in Solomun’s performances and with that set the stage for a diverse range of sounds from the pair. Their most recent EP on Moda Black entitled “Sister” was picked by Pete Tong as his Essential New Tune, and their chart toping remix of Baunz’ “Out the Window” on Pets Recordings garnered support from many of the biggest artists in electronic music. Having solidified their unique sound, you will hear Walker & Royce’s music in many of the top DJ’s from around the world! From Sasha to Adam Beyer, Maceo Plex to Gorgon City and Eats Everything to Locodice, they continue to break down the genre barriers and turn heads.